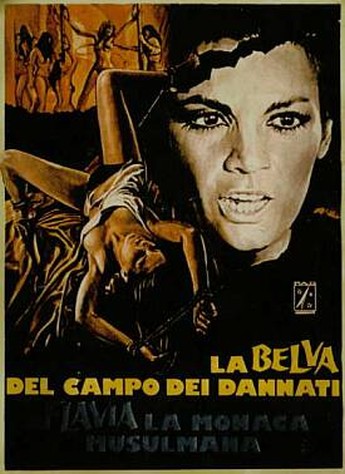 “One of the goriest exploitation films ever made” – Synapse Films. “Bollocks to that” – J. McLennan. Really. I know video sleeves are not subject to the usual constraints of truth in advertising, but let’s just summarise the significant gore here: one horse castration (real), one nipple slicing (fake), one woman climbing into a gutted carcass (could be real or fake), one leg skinning (fake). That’s it. Oh, and let’s get the plot out of the way, too: medieval men are bastards. After suffering through the first hour, enforced nun Flavia (Bolkan) rebels, switches over to the Muslims, and wreaks revenge on her tormentors, before discovering – to her apparent surprise – that medieval Muslim men are bastards too. The word “Duh!” comes to mind.

We kept waiting for this to kick in and actually do something to shock or disturb us, but apart from the four scenes mentioned above (totalling two minutes, tops), it never happened. There are the expected swipes at fathers, husbands and the church – the holy trinity of misogyny – but the feminist subtext is so unsubtle as to become almost laughable, and the copious, gratuitous nudity is hardly likely to endear it to a progressive or liberal audience. This is nicely photographed, and Bolkan does okay as the emotionally-dead heroine; it just fails to live up to the hype. Never mind “one of the goriest exploitation films ever made”, it isn’t even the goriest exploitation film we saw this weekend.