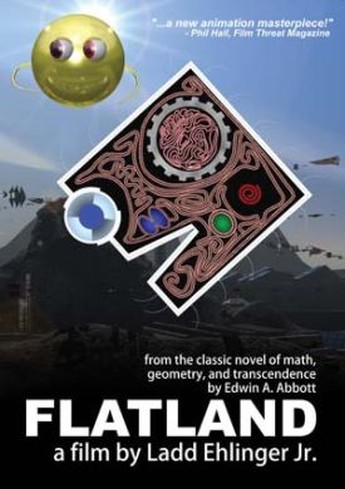 A feature-length adaptation of an 1884 novella, depicting life in a two-dimension world populated by sentient geometric shapes, sounds less like must-see cinema, than a quirky joke in serious danger of overstaying its welcome. However, it isn’t: it’s one of the most interesting animated films I’ve ever seen, both engaging and thought-provoking. The “hero” is a square (Ladd Ehlinger), married to a line (Karen Ehlinger), in a turbulent time for Flatland under President Circle (Trent), with Chromatist rebels and a nearby nation rattling its sabers. Things are about to get even weirder, as the square is visited by a sphere (Hammond) from the previously invisible third-diumension, who opens square’s eyes to a literal new world. It’s both a pointed metaphor for our world, and provides insight into the way we see things and the limitations of our 3D world – I was struck how it offers a possible explanation for paranormal phenomena such as ghosts.

Initially, the storyline is accompanied by narrative inter-titles, which is likely wise, considering how the viewer is otherwise thrown in at the deep end of a completely new world. These gradually fade away, and you’re left relating to the characters: that’s where the film’s real genius lies. Because it’s one thing for an animated film to make you care about humans, or anthropomorphic animals; quite another that, by the end of this, you care what happens to a four-sided figure. The animation, while no Pixar, is certainly good enough for the task, and your brain is kept so busy with the mind-stretching nature of the concepts and world, that it’s easy to overlook the occasional rough edges. The original, which I remember reading back at college, was very much a product of its time, in terms of things like the role of women, and that’s retained here: refreshing to see the makers avoid feeling any need to update things for modern sensibilities. I’d have like to see more of the political aspects explored. Instead, it’s an angle heavily explored early on, them almost discarded in favour of a more metaphysical second-half. Still, I can state with a fair degree of certainty, you won’t have seen many other films like this one.