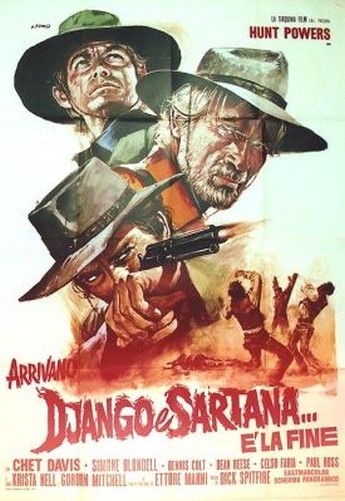 Randomly stumbled into this on YouTube, and figured it might be worth a look. I hadn’t heard of Sartana (Powers), but turns out he is not dissimilar to the better-known Django, though in this later incarnation, he’s more heroic, a freelance crime-fighter. That does make for a nice contrast to Django (Davis), who is in it purely for the money. Circumstances bring them together when Black Burt Keller (Mitchell) and his gang, kidnap local rancher’s daughter, Jessica Colby (Blondell), to act as hostage while they head to Mexico with the proceeds of a robbery. Django hears about the hefty reward, while Santana doesn’t want evil to go unpunished. The two men end up rescuing each other, before forming a loose alliance towards their common goal: rescuing Jessica and sending Keller to his fate.

I read one review which called Fidani “the Ed Wood of spaghetti Westerns,” which seems a little cruel: this is, at least, broadly competent from a technical viewpoint. However, it never manages to rise above marginally interesting, and it doesn’t take too much, for the viewer to come up with plenty of ways this could have been improved. For instance, deepening the relationship between Django and Sartana, and their different approaches to the situation, or having Mitchell replaced by someone who could deliver the wide-eyed lunacy apparently necessary, considering Keller plays cards with himself in a mirror, and even accuses himself of cheating. I can only presume that Klaus Kinski was somehow unavailable, and while Powers and Davis are both decent enough, neither are in any way memorable. I do want to track down some of the earlier Sartana movies though, purely based on their titles. How can you not want to watch something called Have a Good Funeral, My Friend… Sartana Will Pay or I Am Sartana, Your Angel of Death?

Perhaps the only aspect of this which reaches above-average are some rather impressive fisticuffs, possessing a solid physicality that made me wince more than once, and it seems no-one dies without falling from, onto or through something. Otherwise, it’s more the script that’s the problem than the direction or performance, plodding along towards a conclusion that is obvious from the moment the initial scenario is unfolded. Additionally, the villains, rather than actually heading for Mexico, hang around for no apparent reason except to give the two heroes the change to pick them off. Sure, it’s a low-budget B-movie: that still doesn’t mean you get off with dubious plotholes like this. The makers here seem to have forgotten that a well-thought out script doesn’t cost any more than a dumb one.