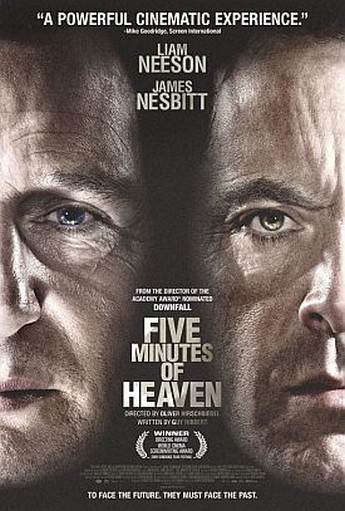 French writer Eugène Sue said it, somewhat before the Klingons: “La vengeance se mange très-bien froide.” But not everyone is a fan of cold dishes, and this film suggests that the longer you bottle up the feelings of anger and guilt, the more problems they cause. In 1975, new UVF recruit Alistair Little (Davison) is sent on his first mission, to kill a Catholic workman. On arriving at the house, Little carries out his task, but the shooting is witnessed by Joe Griffin (O’Neill), the victim’s brother. The sibling’s mother blames Joe for doing nothing to stop the shooting, and Griffin carries this burden for the next three-plus decades.

By then, Little (Neeson) has served jail for this and other crimes, and has now become a spokeperson for reconciliation. A scheme to brings perpetrators and victims together brokers a meeting between the two men. But the adult Griffin (Nesbitt), is not there to shake the hand of his brother’s killer: he plans to stab Little, and make him pay for his crime from 35 years ago. I guess I should make that a spoi… Oh, well, never mind. Wisely, though, Hirschbiegel does opt to let the audience get to know Griffin before revealing his true purpose. By the time we discover it, we already feel sympathetic to the man who has been tormented by what he witnessed as a child, and can see why he needs closure – of a different sort from that being touted by the program.

The main problem is one of pacing: the film gears up towards the meeting of the two men, and the tension becomes very palpable, on both sides. But the script decides to go in a different direction instead, and it’s a mis-step, not redeemed by the route it then takes, towards a borderline laughable climax. Fortunately, the central performances are excellent, though Neeson really doesn’t have a lot to do, except look concerned. Nesbitt, however, is very impressive, and you get a real sense of the long-term damage that such an incident could cause to someone’s life. While the film doesn’t offer any easy solutions, that’s entirely appropriate for the subject, and it’s a thoughtful insight into a conflict which seems a simple religious one the surface, yet was in truth, rather more complex.