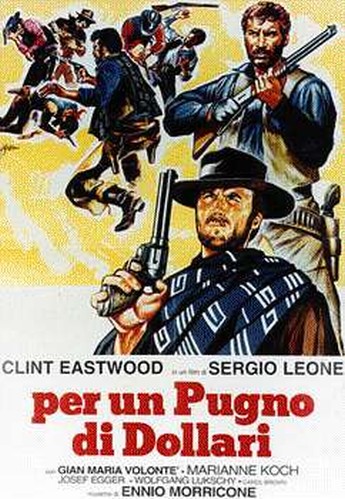 Period dramas are generally less likely to date than most, but it’s still perhaps surprising how fresh this seems, 37 years after its release. About the only thing that might mark it out as a 60’s film is the restrained approach to blood-letting – we’d have to wait for Peckinpah’s The Wild Bunch to see multiple squibs in all their glory. Otherwise, Eastwood is a classic antihero, right from the first scene where he calmly watches the mistreatment of a child. A lesser man would intervene right then, and likely get killed for his pains; this anonymous stranger, possessing no background at all, just files it all away for future use.

His picking of a fight is equally inspired (“I don’t think it’s nice, you laughin’…”), as he rides into town, pits the two sides against each other, and helps them destroy each other, for no obvious reason beyond the mercenary, and Ennio Morricone’s score is justifiably a classic in its own right. A cheerful ripoff of Kurosawa’s Yojimbo, it took a bunch of Italians to rewrite the landscape of the American Western, making more progress in 100 minutes than managed by the entire career of John Wayne. Eastwood would go on to redefine the cop genre almost as much with Dirty Harry – by the time you reach the end of this, the temptation to start smoking cheroots and squinting may be almost overpowering.