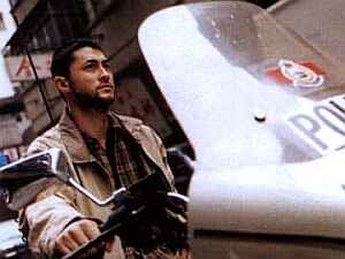 Chan and Wong team up again after Beast Cops in this fast action flick about the HK police’s SDU, their equivalent of a SWAT team. Don (Wong) and Lau (Damien Lau of Heroic Trio fame) are in charge of the city’s top SDU group, seconded to the little-respected customs and excise division after the Ice Queen, a notorious drug dealer, brings in a huge cargo of narcotics. Minnie (Full Throttle‘s Gigi Leung) is the top customs agent intent on getting the Queen after losing her in the film’s opening firefight. Friction between the two units and police politics soon go by the board when a third group of players enter the scene – a kind of “Anti-SWAT” team staffed by mercenaries out to take the drug load for themselves.

It’s a neat concept, matching tactics for tactics, but everything around the gun battles is tissue-thin. New York-born Wong delivers a good eighty percent of his dialogue in English throughout, which seems oddly jarring in among the remainder of the Cantonese-speaking cast, especially when he quotes Yoda during the film’s concluding scenes. The potential romance angle between his character and Leung’s, something a Western version would have pushed to the forefront, is sadly left unexplored in a movie that could use more characterisation, not less. This is a semi-sequel to Chan’s Final Option, made by Media Asia after he quit Golden Harvest; GH’s Final Option 2 (aka Best of the Best) came out in Hong Kong the same month and sank in box office competition with this effort. Overall, this is a solid by-the-numbers cop actioner with some intense fight scenes but a weak plotline.