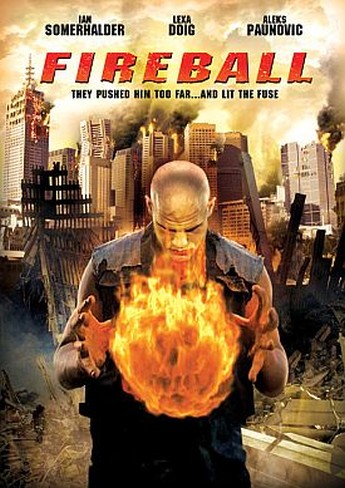 While undoubtedly a ludicrous idea, this is done with enough energy and pizzazz to make for an entertaining time. Former gridiron star Tyler Draven (Paunovic), is on a ‘roid-rampage that ends with him locked up in a small-town prison. A subsequent fire sends him to the local hospital but the combination of the heat and his designer steroids has given him the ability to start and, subsequently, control fire with his mind. He escapes custody, and heads off on a rampage against those Draven feels has wronged him, including a sleazy tabloid journalist (Cunningham): local fire investigator Ava Williams (Doig) and FBI agent Lee Cooper (Somerhalder) have, first, to work out what the hell is actually going on, and then stop Draven before he can take his ultimate revenge on society as his abilities increase. Could that possibly involve the nuclear power-plant conveniently located nearby? Oh, go on then…

Yeah, like I said: completely loopy, even with Doig spouting off pseudo-scientific explanations involving the sodium in Draven’s sweat, which would fail a chemistry O-level. Still, she delivers them in such a way as to allow them to slide by, and both central characters deal with things in an appropriately sardonic way – the dialogue has some fun lines for them, such as when Ava asks Lee, “How’s Draven?” and he responds, “Still extra-crispy.” The digital effects are more than slightly-ropey now and again, and one also suspects [hopes, certainly] that a nuclear-plant would have a bit more in the way of security than one guard at an open gate, but events whizz by at a good rate, and the performances are fun to watch. Paunovic makes for a suitably cartoonish bad-guy, ranting about how society is to blame, as he prepares to unleash his atomic armageddon, and it’s refreshing to see a movie that consciously avoids – and justifiably so, since it’s completely superfluous – the obvious “romance” between its two leads. Significantly better than most SyFy original movies, and enjoyable nonsense if you’re in the right mood.