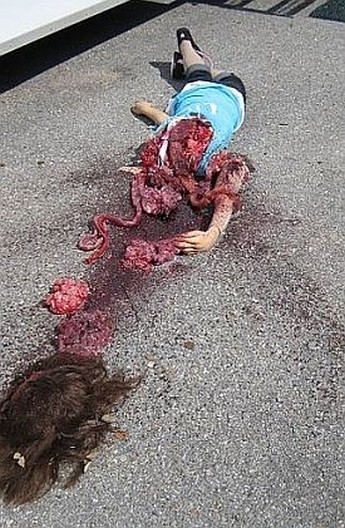 I’ve been watching the Friday the 13th movies of late – reviews coming soon – and it struck me that the Final Destination series are the 21st century equivalent. They are, basically, slasher movies without an actual slasher. Wikipedia defines the genre as “involving a psychopathic killer stalking, and killing a sequence of victims in a graphically violent manner, often with a cutting tool,” which seems a close match, with the spectre of Death as the “psycho killer.” Certainly, there’s no doubt where the focus is here, and it’s not on the subtle characterizations or the intriguing plot. Add in that this was made in 3D, and you can see the creators are not very interested in the cinematic arts. That said, it doesn’t suck as entertainment for your lizard brain, even if it’s now far from a new concept and there’s nothing here to rival, say, the “bus moment” from the original.

The trigger here is a NASCAR accident, allowing for plenty of things to fly directly toward the camera. If you’ve seen the others, that’s all you need to know, as the rest follows exactly the same lines: survivors get picked off, and try to figure out how to break the chain. That’s all you need to know, and by this point, no-one is bothering to pretend otherwise. Perhaps due to the 3-D aspect, a lot more of this seemed digital than before, which still isn’t as convincing as physical effects. However, there are still sufficient moments of crunchy goodness to justify its existence. Quite why this one should be called The, rather than A Final Destination escapes me, and one wonders what they might title any future entries. That Final Destination? Who can say. Regardless, while I can’t recommend spending any money on this, it delivers what you expect, and if you enjoyed the previous movies, will likely find this one passable entertainment.