Films involving airports can largely be divided into pre- and post-9/11. This just managed to sneak into the former category, and so harkens back to a kinder, gentler time when a trip on a plane did not resemble a shoeless version of the Spanish Inquisition. For example, after Alex Browning (Sawa) has a disturbingly realistic premonition, he runs screaming down the gangway, yelling that the plane is going to blow up. He’s taken off the plane, sure… which then takes off with his checked baggage still on board, a major security faux pas these days. More startlingly, when the plane does indeed blow up, he merely gets quizzed for a few hours by two FBI agents, and is then released into the custody of his parents. Pull that shit now, and you’d be getting waterboarded before you could say “Guantanamo Bay,” white American male or not. 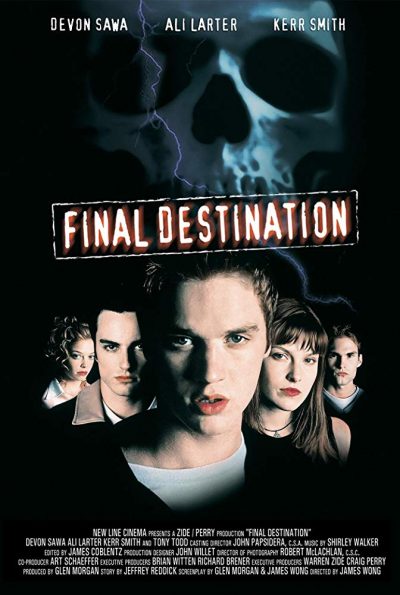 That aside, this is a solid entry, offering a nice twist on the traditional slasher concept. Instead of the unstoppable masked killer, it’s an unstoppable universal force, in the shape of Death, manipulating the world to attack its targets, after they have escaped its initial net. Interestingly, there’s not much supernatural as such in its methods; water flowing backwards after the victim in the bath-tub is about as implausible as it gets. Otherwise, it seems Death is a bit of a slacker, leisurely pursuing those on whom it has set its sights, with the necrotic equivalent of pool trick-shots, each preceded by a raspy, “Waaaaatch thisssssss….”. Surely a swift bolt of lightning would prove more efficient? Hell, it takes almost six weeks after the accident before Death finally shows up. What else, exactly, was the Grim Reaper doing all this time?

The sequels increasingly became exercises in spectacular snuff porn, a cinematic version of /r/watchpeopledie. Now this is not necessarily a bad thing: courtesy of FD2, any time we’re driving on the highway behind a poorly-secured load, Chris or I will inevitably mutter to the other, “Final Destination moment…”. In comparison to what followed, most of the deaths here seem relatively prosaic, save for teacher Valerie Lewton (many of the characters are named in nods to classic horror films). Though they’re no less impactful for it: indeed, the one death everyone remembers [spoiler, obvs] is so shocking entirely because there’s zero build-up to it. Alfred Hitchcock once expounded on the difference between suspense and surprise. While he’s not wrong, you’d be hard pushed to condemn the surprise this moment provides the film, as inferior in any way to its more suspenseful elements.

I’m still not quite convinced there’s any genuine logic here, despite the helpful use of visual aids by Alex to chart out which individual death has lined up next – the ability to multi-task not apparently being among Mr. Reaper’s strengths. Is it the order they died on the plane? Reverse order? Or reverse order, skipping every second person whose name contains a D? Still, at least it tried to provide something of a plot, which is more than can be said for most of those sequels. And while the performances are mostly adequate, Tony Todd, as a mortician who represents the nearest we get to the personification of Death, steals the entire movie. If the deaths became more gruesome going forward, I’m not sure what follows represented an overall improvement in quality.

[Original review] The best character in this film has no lines and is never seen – at least directly, for I mean G. Reaper, Esq. A bit miffed when six kids and one teacher manage to avoid a plane crash, GR decides to off them anyway, using a variety of imaginative methods. Although this suggests Death has nothing better to do than chase dumb teens around, you can’t help but warm to such grimly fiendish stubbornness. And certainly, this shows more character than the humans: your first guess as to who’s going to survive will almost certainly be correct.

Still, the fatalities are spectacular, especially one contender for FMRT! moment of the year [as a clue, the last three letters stand for “…me, rewind that!”], though obviously you won’t get to do that in the cinema. While far stupider than you’d expect from X-Files alumni Wong and Glen Morgan, this is refreshingly free of Scream-style “irony”, with the daft premise played dead straight. The result is a well-handled vehicle for the consumption of popcorn, as well as providing valuable lessons in road and kitchen safety. B+