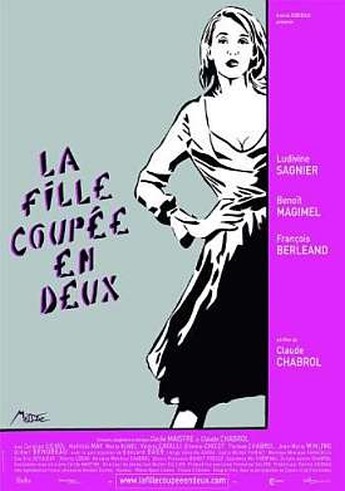 Oh, those French… There’s a lot about this film which marks it out as terribly Gallic, even if you don’t hear a word of dialogue. Firstly, no-one is the slightest bit fazed by a girl in her twenties having an open affair with a married man more than twice her age. Secondly, the characters seem a lot more intelligent than their equivalents in the upper middle-class of American society would be: they seem to read a great deal and quote philosophers to each other at the drop of a beret. And, most obviously of all, they smoke like chimneys. In Hollywood these days, you’re more likely to see a character light up a joint or snort some coke than reach for a packet of low-tar. So, only in Lyon. There, appropriately-named TV weather-girl Gabrielle Deneige (Sagnier) finds her attentions divided between successful author Charles Saint-Denis (Berléand), old enough to be her father, and the mercurial heir to an industrial empire, Paul Gaudens (Magimel), who can swing from passion to intense hate in a minute. Neither may quite be the perfect match, coming respectively as they do, with a wife and a disapproving mother, and given Paul’s near-psychotic outbursts, it’s not really a surprise that he doesn’t take kindly to the presence of a rival, especially someone he has dislike even before that.

An alternative title might have been The not-so Discreet Faux Charm of the Bourgeoisie, and in many ways, what we have here is an impeccably-mannered soap-opera, with everyone being terribly polite on the surface, when they want to go for each other’s throats. Despite this, it’s uncomfortable to watch them proceed along an inexorable path to self-destruction; you can’t stop looking, and want to see how the multiple triangles between the characters eventually unfold. It isn’t going to be pretty, that’s for sure, and poor, innocent Genevieve seems to have been dealt a hand from the bottom of the deck. There’s not much actual malice present; the characters are genuinely convinced their actions are for the best, even as they appear otherwise to us, as neutral observers. Points must be deducted for a particularly-clumsy illustration of the title at the end, without which we could well have done. Otherwise, this is icy-cool cinema, possessing brains much more than heart.