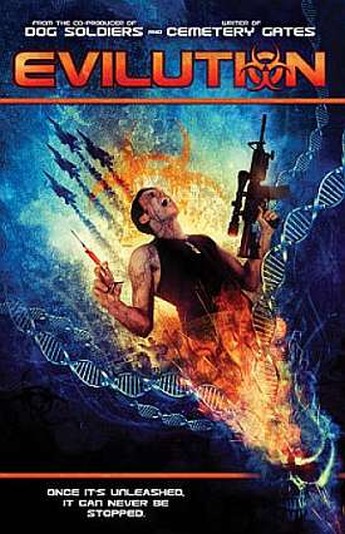 After an incident at a secret Army base in Iraq, Darren (Peter-Kaiser) escapes and goes underground, changing his identity and becoming a mild-mannered science teacher. Except, he’s actually continuing the experiments in which he was involved, in the basement of his apartment complex, with the help of a bottle of serum smuggled out of the Middle East. Which might be ok, if it weren’t for a) Maddy, the neighbour with the hots for him (Ramirez), b) the Army agent (Colceri) sent to make sure he doesn’t get any further, and c) the assorted low-lifes in and around the apartments, led by Random (Gugliemi). Between these three factors, Darren doesn’t exactly get left in peace, and when the serum escapes from his control, it becomes a struggle to keep it from getting into the world at large. Adding impetus to Hall’s mission is that this isn’t your average, run-of-the-mill, ho-hum infection that turns its victims into the cannibalistic undead. It’s actually an alien creature with a bad attitude towards humanity – this grudge is largely understandable after what happened to it in Iraq, where the military tried to weaponize it. It’s not happy.

Conlee has a fine grasp for action, and when things are in motion – the opening and the final third – this is a roller-coaster ride that’s a great deal of fun, as Hall and his motley band of unwilling warriors try to keep things under control. Less successful is the middle section, which relies on the performances of the actors, and these are generally not up to the task of sustaining interest, though I enjoyed James Duvall’s turn as Asia Mark [he was the rabbit in Donnie Darko!]. Good use is made of the central location, the abandoned Linda Vista hospital in LA, which becomes the “Necropolitan” apartments presided over by a very strange manager. It’s exactly the kind of flop-house where one can imagine bizarre experiments taking place – though Ramirez is rather too attractive to be there, or lonely. The effects are nicely rendered, and once things get going, there’s enough energy to make this an entertaining entry in the SF subgenre of zombie movies.