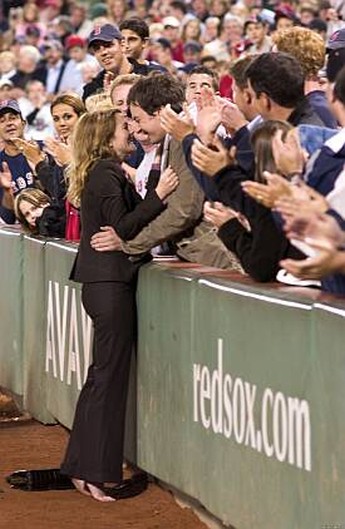 This works surprisingly well: “surprisingly”, since I generally find Fallon irritating, and Barrymore singularly unattractive. I think it’s her chin. Maybe it’s this that makes them seem perfect for each other here. Lindsey is a number-crunching executive; Ben, an obsessive Boston Red Sox fan. Gradually – inevitably – they grow to understand each other, against the backdrop of the Red Sox’s 2004 pennant chase which (in case you’d forgotten, or never knew) brought the city its first World Series title since 1919. It’s based on a Nick Hornby book, originally about an Arsenal fan – there was a British movie already, starring Colin Firth, which had almost zero box-office pull in America, so a ruthlessly transplanted version was made instead. Yet, whether you know much about baseball or not, it works because the central concept remains true: relationships are fraught with compromise. How you react likely depends on your opinion in this area.

I reckon you fall in love with a whole person; if you demand changes, you don’t really love them. You can ask, of course: that’s totally different – if they love you, they’ll respond, but ultimatums are no foundation on which to build. Hence, my sympathies lay with Ben, prepared to sell his season tickets for Lindsey (what is she prepared to give up? Clearly not her career), though the film carefully makes him adorable before revealing the depth of his obsession. Oddly, he doesn’t use Lindsey’s passion for numbers: baseball is a game of ERA, BA, Ks, and a million more statistics in which she’d surely feel at home. For an obsession shared is an obsession halved, as my wife – who knows what the previous acronyms mean – would likely say. In the Red Sox nation, this is perhaps the greatest story ever told, even outside the romance. However, as long as you’re a fan of something, it still works; when Lindsey says, “You can love under the best and worst conditions,” every true fan should be nodding in agreement.