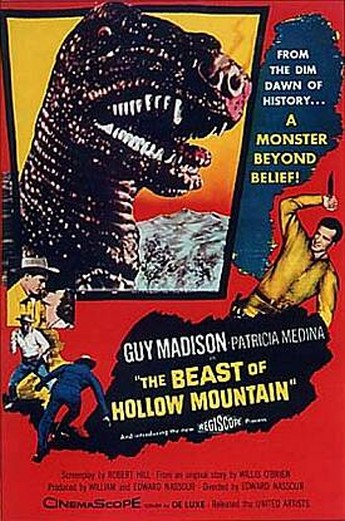 Based on a story by Willis O’Brien. Not, please note, featuring FX by him. We spent the first hour wondering why the monster didn’t show up: then it did, and we realised exactly why. While using claymation was not necessarily a bad idea, let’s just say if Wallace and Gromit had zoomed through, it’d have been a big improvement. For the first hour, it’s an interminably bad Western, less like Valley of Gwangi than Jean de Florette – though that didn’t have a monster. Except Gerard Depardieu’s hump. Anyway, back to the film. [Sigh] Rancher Jimmy Ryan (Madison) faces local opposition to his farming efforts in Mexico, not least because the fiancee (Medina) of a local rival keeps making doe eyes at him. Though, being honest, Ryan’s relationship with neckerchief-wearing “assistant” Felipe (Rivas) had us whispering “Beast of Brokeback Mountain!” – Ang Lee has a lot to answer for…

Chris dragged me to watch this one, and for that I can only thank her, even if you’d best bring your own entertainment – likely in the form of finely-tuned sarcasm. For heaven knows, the film doesn’t deliver much by itself. We mocked the portrayal of Mexicans (drunks or criminals, almost to a man); we yawned at the lengthy footage of some festival or other; we sniggered at a cattle stampede, containing obvious sped-up footage of ambling bovines. 45 minutes in, we see the shadow of the monster, but it’s fifteen more before the beast itself turns up, with a tongue that looks like an octopus is struggling to escape from the dino-throat. There’s no denying the final showdown is a spectacle: it’s just a shame it’s far beyond what the abilities of the film-makers can deliver.