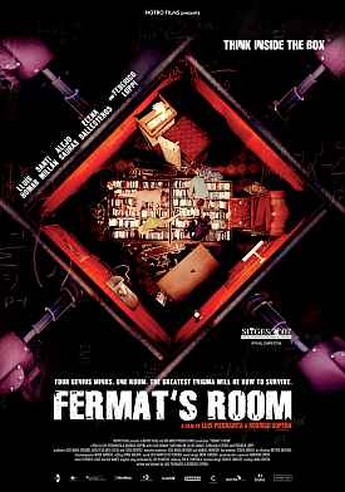 After solving an introductory puzzle, four mathematicians are invited to a remote location, lured by the promise of solving a great enigma. Enter their apparent host, who calls himself Fermat, though he soon excuses himself after a call from the hospital where his daughter is in a coma. The remaining players find themselves unable to leave, and worse, that the walls are controlled by hydraulic presses, which are moving in on them; the only way to delay them is to resolve a series of riddles left on a PDA. Who is behind their fiendish predicament? And what can they do to get out? The result is a twisty maze of gradual revelations, located somewhere between Saw and Cube, though fortunately, no actual mathematical knowledge is required in order to appreciate the film. The four victims are the usual grab-bag of ages, sexes and background, from the precocious whizz-kid (Sauras) who claims to have solved one of math’s great riddles, to an inventor (Millán) whose great invention is a duck which vomits popcorm. How did the world cope without that?

Of course, their presence is not as random as it seems, though to the film’s credit, all the clues to the eventual resolution are out in the open, so the audience has just an equal chance of figuring it out as the characters – I can’t say either of us did. It’s the kind of film where the script is easily the most important element, and can be derailed with one poorly-chosen twist; there are no such mis-steps here, at least not while things unfold [you may have a few questions that are left in need of an answer at the very end]. The performances here are definitely secondary to the machinations of the plot, yet do what is needed of them – the highlight is likely Ballesteros’s female mathematician, with her chilling tale of where online chess can end up. It might have benefited from some a higher body-count, just to emphasize the seriousness of their predicament, yet the time passed remarkably quickly, and it certainly is one of the most engrossing thrillers of the year.