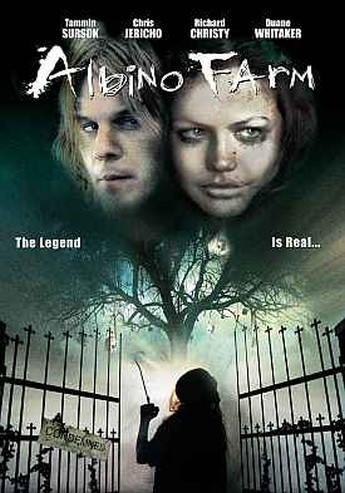 Four college students go on a research trip into the rural countryside, seeking local legends. Arriving, courtesy of a convenient flat-tire, in the town of Shiloh, they hear of the titular location, but are sternly warned against going there. Naturally, this only excites their interest, despite the presence in the town of a disturbingly-large number of the physically-deformed, such as the diner waitress who cheerily serves them burgers and fries with her flipper. Yep: flipper. Now, logic would dictate that if people lie that are allowed in ‘polite society’, exactly what would be deemed worthy of sequestering away in the remote backwoods? And would you really want to go poking your nose around there? However, a) this is a horror film, and b) these are college students. Logic is therefore not exactly high on the list of priorities. So, with the aid of gratuitous, if obviously body-doubled boobies, they convince some local juvenile delinquents, led by WWE’s Chris Jericho – his performance is among the best in their recent history, albeit mostly because those of his ring-mates barely qualify – to take them into the woods. Hilarity ensues, as I’m sure you can imagine.

While it would be difficult to find a more stereotypical bunch of main characters, the film has a creepily twisted imagination that works surprisingly well; either they had some really good effects, or it’s the biggest collection of real-life freaks since Tod Browning [actually, it’s probably somewhere in the middle]. There is something of the urban legend feel to this, and it’s the kind of thing you might hear round a camp-fire, with noises in the trees for that extra frisson. As such, the predictability of the script isn’t as much of a problem as it might be, since it’s that very familiarity which is part of the hook. If there’s a problem, it’s more that the film shies away from graphic blood-letting, and that’s equally necessary; there’s one fine moment involving someone’s palate, and more of that would certainly have been welcome. The ending is great, a lovely mix of “just when you think it’s over” and freaksploitation that is entirely fitting to the tale. I confess to going in with fairly-low expectations; these were met, and then surpassed. For what it is, it’s better than most.