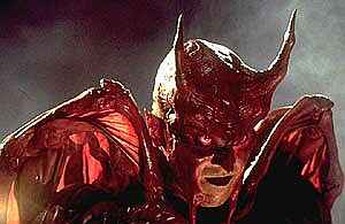 Inevitably toned-down for the silver screen, this comic-book adaptation still manages to come across as pretty sleazy, though also seems a remake of other comic-book movies we’ve seen. Hmmm: pact with the devil…super-flowing cape…anguished hero…yes, it’s Spawn with tits (though to be fair, the comic-book of Faust was first, by six years). And much like that live-action movie, it succumbs because of a gaping hole in the center; buried under make-up for much of the running-time, Frost rarely comes across as more than a killing machine, and you don’t really care a damn (pun intended) about his fate.

That’s an especial pity, as the supporting cast are grand: Combs goes against type as a cop (though gets to let rip in typical JC-style at the end!), while Brook and Monica Van Campen are uber-sluts of the highest order, and even Divoff is more restrained than you’d expect as ‘M’, Faust’s creator. There’s gore, ropey dubbing, some gore, a gratuitous heavy-metal soundtrack, more gore, Satanic ritual, even more gore, and nudity aplenty. Oh, and did I mention the gore? Yuzna certainly tries hard, and there’s one eye-popping scene where M punishes sidekick Van Campen by…well, I won’t spoil it, but viewers seeking lots of T&A will be happy. Or perhaps not, hehehe. 🙂 However, it’s a visceral film with not much to engage the heart or the brain; did you really expect anything different though?