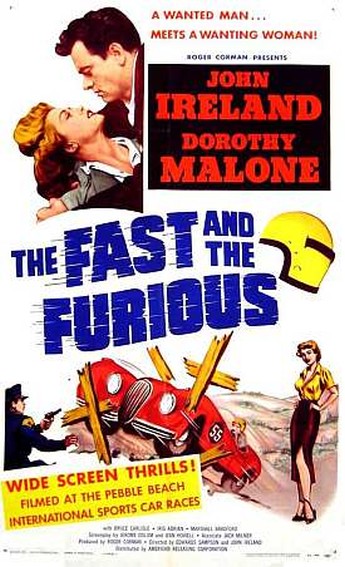 Almost completely unrelated to the modern series of films bearing the same name – except, perhaps, in that both concern car-racing – this can only be described as dire. Frank Webster (Ireland) is on the lam, hunted by the police for his involvement in a crash (stock-footage, I’m guessing) which killed a truck-driver. When he is identified in a diner, he grabs a hostage, in the shape of Connie (Malone), who is driving her Jaguar sports-car to take part in a race down the coast and into Mexico. Frank plans to take advantage of this to cross the border to freedom, but Connie is not exactly a pliable hostage, and Frank lacks the hard-nosed attitude necessary to bend her to his will. He ends up locking her in a remote outhouse, and Connie decides the best way to attract attention and get rescued from there is to set the place on fire. I think that was the point at which we lost any hope that this movie had anything to offer, and the over-long sequences of undercranked car-racing only enhanced that impression.

One of the early works in the Roger Corman canon – he produced it and came up with the story – the main emotion it provoked in us was amazement. As in, how the hell did the man behind this, end up getting a standing ovation at the Academy Awards earlier this month? Admittedly, we are talking 55 years later, but you certainly couldn’t have predicted that with a straight face on the basis of what you see here. You can certainly understand why, when Universal bought the rights to the title, they discarded just about everything else. Even at a scant 73 minutes, it feels like they had nothing more than a story on a napkin to work from, and the relationship between Connie and Frank is never developed in the way it needs to be – some scenes will provoke nothing more than snorts of derision. While occasionally a throwback to an amusingly-innocent earlier era (everyone seems to know of Frank Webster, and that he’s got a girl and a Jaguar, but no-one ever works out to whom they’re talking), it will only be of interest to those interested in the hot-rods it contains. So, not really all that different from the remake, then…