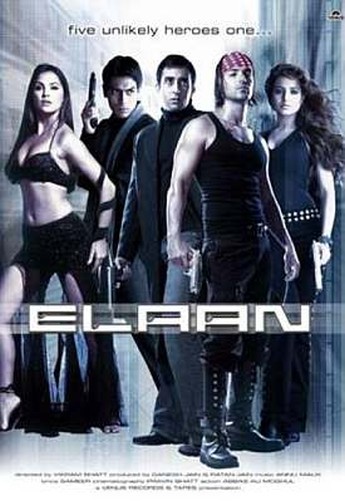 When his adopted father is killed by international gangster Baba Sikandar (Chakraborty), after failing to give in to extortion, Karan Shah (Khanna) vows revenge, and puts together a team to bring Sikandar back to India, so that he must face justice for his crimes. Included in the crew are former cop Arjun (Rampal), thrown off the force for going after the man who killed his wife, and Abhimanyu (Abraham, who made his Bollywood debut in the unfortunately-named Jism), Sikandar’s former enforcer who was double-crossed by his boss and sent to jail. There’s also Abhimanyu’s girlfriend and a nosey journalist, but this being Bollywood and they being women, their main purpose is the dance numbers. The team track Sikandar down to Europe – first Venice, then Munich (actually, it’s Bern, being used to stand in for Munich; not sure why), and finally the French-German border where they try to lure Sikandar across to territory from which he can be extradited.

While rarely boring, this isn’t very good, feeling about thirty years out of date. It’s almost like a “How Not To…” manual for Evil Overlords, with his men unable to hit a barn if they were shooting from inside it, and driving vehicles which explode into fireballs at the slightest tap, at one point when kicked by one of the heroes. For something made in 2005, it’s just not acceptable, and it also hurts that the best actor in the film doesn’t make it to the end. Chakraborty doesn’t make for a bad villain – he comes over like a Bollywood version of Ian McShane, with the same, shark-like, dead eyes. But it seems to be trying to ape the approach of a Bond movie – not least in an opening song, which should have John Barry speed-dialing his lawyers – yet possesses little or none of the cinematic firepower necessary to back up that ambition. The name’s forgettable… Completely forgettable…