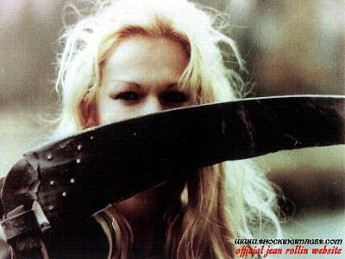 After the bad taste left by The Brotherhood, I decided to redress the balance with some cheerfully uncloseted lesbian vampires. It’s an area Jean Rollin seems to like, and here it seems to come together in what’s probably his best film. Thief Lamaire ends up in a house occupied by two strange women (Mai and Lahaie): what are they waiting for, and are they a bigger threat than the colleagues he conned, who wait outside?

No prizes for guessing, and Lahaie’s literal scything through her victims is fabulous stuff. She really holds the film together, with a predatory and feral animalism which is likely down to her long career in hard-core porn, and is hugely effective here. Most of the film’s creepy and disturbing moments are her responsibility – when she isn’t on the screen as a distraction, the low-budget becomes more obvious, but effective cinematography and a running-time of only 78 minutes means it still doesn’t outstay its welcome. There’s barely more than one location and the cast is hardly into double figures, but that’s all this story needs. A miniature gem.