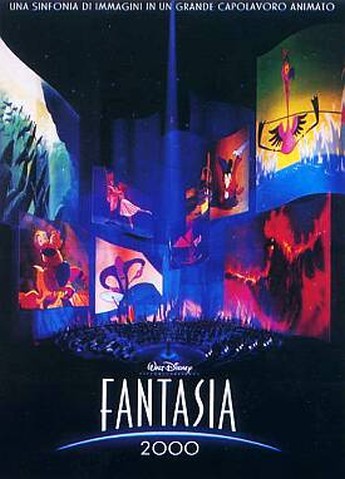 The original Fantasia was always supposed to be a “work-in-progress”, but by waiting half a century, and then almost starting from scratch, Disney will be accused of plundering a classic. However, this sequel (with only The Sorcerer’s Apprentice remaining, it seems the safest description), has almost exactly the same strengths and weaknesses as the original: like all anthologies, some parts work better than others, and it all depends on how closely the animator’s vision matches yours. This is as much down to cultural factors as anything: according to the introduction, when we hear Elgar’s Pomp and Circumstance marches, we are supposed to think of graduation day. Obviously, in Britain, we don’t have such things and it is far better known as Land of Hope and Glory, almost a reserve national anthem. And why is Pines of Rome accompanied by whales flying across the sky?

Better is Gershwin’s Rhapsody in Blue, with a stylised view of Depression-era New York that is note-perfect, and the finale, volcanic destruction to Stravinsky’s Firebird, is also full of memorable imagery. So how does The Sorcerer’s Apprentice stand up to these? It’s very hard to say, because (especially on the IMAX screen), it looks dreadful, all grubby and grainy – you’d think Disney could have made more of an effort to restore it. However, it remains part of the collective mind: few people know anything else by its composer Dukas, and you can’t hear it without thinking of Mickey struggling against the rising tide. It’s far too early to say whether anything from the new film will have as lasting an impact – perhaps not, but on its own terms, it is certainly no less enjoyable.