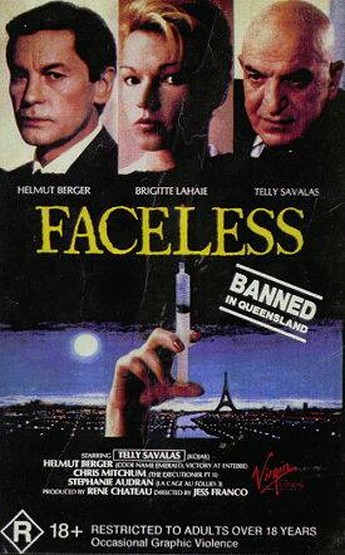 [6] Rumours that Franco was the man behind Edge of Sanity [false!] made me seek out this, which had been widely described as better than his average. Not much of a compliment perhaps, but it is a classy mad surgeon movie – after his sister is scarred by acid, Dr. Flamand (Berger) tries to build her a new face with the aid of his nurse (French porn queen Lahaie), by transplanting one from a beautiful model (Munro), whose father (Savalas) sends a private eye to track her down. Good cast for a Franco movie, huh? After a shaky start. the effects start to fly, with a lot of surgical splatter, a chainsaw decapitation and a syringe in the eye that deserves entry in TC4’s Eyeball Violence chart. Only a heavily overused, rotten song prevent it from being very watchable both on sex ‘n’ violence and aesthetic grounds.