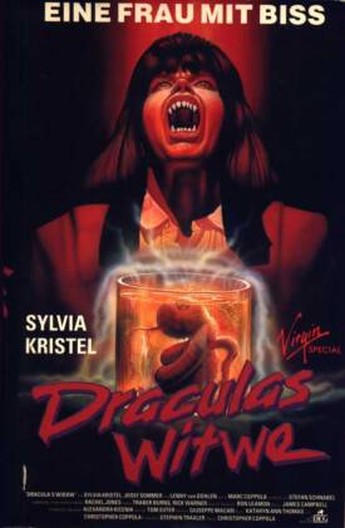 [13] Equal opportunities in the occult are a variable kinda thing. In certain fields, such as werewolves, men have the field almost to themselves – the most notable exception being Sybil Danning in The Howling 2 – maybe because hairy palms are not considered aesthetically appealing. On the other hand, the “possessed teen” genre has been mostly a girls’ domain; Regan, Carrie, Mary Lou and their kin. Somewhere in the middle stands the vampire, currently undergoing something of a renaissance thanks to Gary Oldman’s appearance as Dracula. But it was not the first Coppola version of the story, although Dracula’s Widow is certainly not Francis Ford in action.

Not all female vampires can be classed as obviously insane – Delphine Seyrig, in Daughters of Darkness is as cool and collected an individual as you could see – but drinking human blood is not normal behaviour by most standards (except in certain parts of the West of Scotland…). And when combined with scenery-chewing, such as we see Sylvia Kristel doing here, we’re definitely deep into the zone of the ‘differently sane’. She arrives in America enclosed in a crate sent to the Hollywood House of Wax, a run-down establishment operated by Lennie van Dohlen and his girlfriend. Kristel chomps her way through various members of the community and turns Van Dohlen into her accomplice as she seeks a somewhat belated revenge on Van Helsing. He’d offed her husband back in Transylvania a century ago, so isn’t about but any descendant of his will do. He, meanwhile, starts to view his girl-friend, less as a sex object, and more as lunch.

The film seems uncertain whether it’s tongue-in-cheek or not; some elements are definitely parody-ish, while others seem intended to be taken seriously, and the whole thing looks seriously patchwork as a result. This uncertainty extends to the era – could be anytime from the 40’s on. Try turning the colour off and viewing it in b&w, as this enhances the faux-noir feel, though you do lose the icky bits. Still, van Dohlen’s performance is engagingly loopy, reminiscent of a young Anthony Perkins and Sylvia Kristel – remarkably, keeping her clothes on with unusual decorum – manages to be convincingly European, though I imagine actually being European is something of an advantage. Overall, as TVM’s go, it’s an amiable way to pass ninety minutes and it’s several steps above Stuart Gordon’s very disappointing Daughter of Darkness.