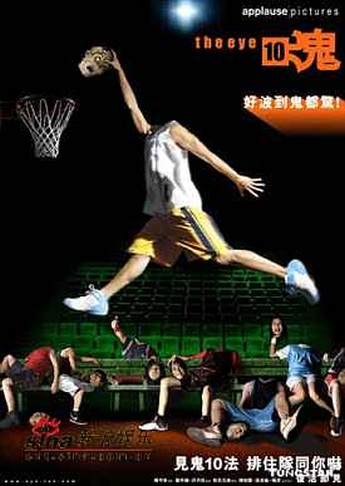 Hang on, what happened to The Eye 3-9? Ah, the “ten” here are actually methods of seeing ghosts in a book owned by Chongkwai (MacDonald). #1 and #2 are cornea transplants and a suicide attempt while pregnant, nods to the film’s predecessors, while the other eight are tried by him and his friends while on holiday in Thailand. They range from the expected, like a Ouija board, to the…well, did you know you can see dead people by bending over and looking through your own legs? If it were that easy, John Edwards would not get $250 per ticket for his “seances”. Still, this is the movies, and naturally every method works. However, one of the party vanishes, and when the rest return to Hong Kong, they find they can still see dead people.

The problem is, the Pang Brothers seem to have decided what they want to do here is make a comedy: that’s the only reason for the break-dance vs. possession scene, which seems to have strayed in from Scary Movie, only without any of the subtle comedic timing. Or how farts kill ghosts. Maybe it was a real side-splitter in the script meeting. On screen: not so much. No denying the visual style the Pangs bring to proceedings, and the style seems deliberately fractured; the plot almost consciously nonsense, and characters behave with idiocy that borders on parody. I also liked the soundtrack, which is more energetic and convincing than most of the performances (I’d actually buy the CD, which is a rare thing for me to say indeed). But in the end, it just didn’t keep me interested; rather than being scared sleepless, I found myself instead being lulled towards unconsciousness.