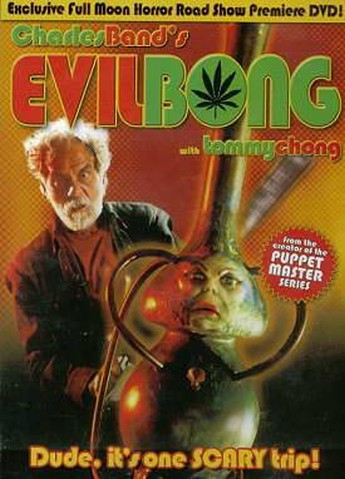 Must say, I was disappointed – mostly in the bong itself, since I was expecting something more than eyes that shift from side to side. I mean, its lips don’t even move, and as a cinematic villain, this one falls low down the list as far as actual threat goes; hell, even down the list of Full Moon villains. The film also taken place entirely in two locations: the apartment shared by four college kids, and the ‘Bong World’. That could have been anything at all – let your imagination run wild! – but apparently, no matter your hopes, dreams or ambitions, all victims of the bong end up…in a back-room at a strip-club. Sigh. Alistair (Weidoff) is the nerdy room-mate of three stoners, who buy said bong. When his girlfriend (Sydney) is apparently left for dead after using the pipe, it’s up to him and previous owner Jimbo (Chong) to go in and save her.

The idea is great; the script, actually, is not bad either, with some decent characterizations. Okay, not much more than stoner + nerd, but it’s kinda neat, such as when Grandpa Cy (Jacob Witkin) shows up, all foul-mouthed and paraplegic. There are also nice cameos from Full Moon faves like Tim Thomerson, who gets to recycle the best line from Trancers, as well as puppet killers like The Gingerdead Man. However, the bong is so lame, it brings the film to a grinding halt, despite enthusiastic voice work from Michelle Mais. Rather than anticipating its attacks, you eventually dread them, since they’re all the same: the victim is mauled by a stripper wearing a different model of Band’s (admittedly cool) Monsterbras.

Overall, the film does the little things right, but has a gaping hole at the center. Perhaps they spent all the money on the music, which includes the likes of Snoop Dogg, ICP and the Cottonmouth Kings. They should have devoted the cash – or, at least, the time – to the bong and its world, helping to unlock the potential here. Maybe that would have helped: or perhaps the idea just isn’t as entertaining as it seemed. Stoned, it might conceivably be a damn funny film; unfortunately, I’m just a straight-edge horror movie fan. As such, this left me hungry, and for more than brownies