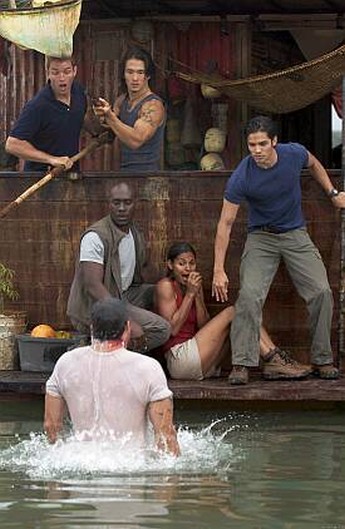 The original Anaconda was a bit of a guilty pleasure, seeing stars, both established and future (Jon Voight and J-Lo), get chewed up by a giant snake in the Amazon. The sequel doesn’t have much new to offer, and the non-entities who make up the cast are unlikely to find themselves in anything attaining a larger audience than a supporting role on The OC.This time, the destination is switched from South America to Borneo “in the rainy season”, though after the first night, there’s conveniently only one shower. The monsoon: it’s vastly over-rated. Anyway. The expedition seeks the titular flower, which may hold the secret of eternal youth. However, after their boat goes over a waterfall – probably the most impressive scene – they’re left to make their way through the jungle on foot. And since the orchid is in the food chain, the local snakes are immortal and have reached the appropriate size…though no other fauna is apparently affected.

The problem here is, there isn’t much imagination on view. The attacks come more or less the same way, after the inevitable false shocks, mostly courtesy of their guide’s pet monkey. The snakes themselves are almost entirely CGI, and not particularly convincingly integrated into the environment; the best use of them is when the humans are walking through a swamp, and the snake is lazily swimming, unseen, below the surface. Otherwise, the level of interest generally declines steadily, the longer this goes on, and none of the potential inherent in the exotic location is brought out. Even the ludicrous finale, where we learn snakes apparently explode like high-performance sports cars when dropped, can’t rescue it. And don’t even get me started on the fact that there are no anacondas in Borneo.