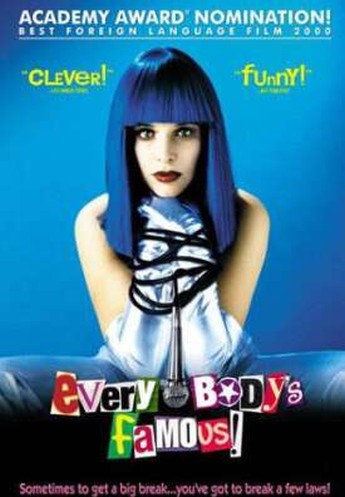 13 years previously, director Deruddere made Crazy Love, which showed a sympathetic necrophile well before Jorg Buttgereit. He then largely vanished, outside Belgium at least, until I almost fell off my chair, on finding he’d been nominated for the 2000 Best Foreign Film Oscar. Unsurprisingly, this is nowhere near as edgy, which is a shame, but as warmhearted fluff, you could do much worse. Redundant factory worker Jean (De Pauw, Crazy Love‘s ‘hero’, looking here very like Jean Reno) dotes on his daughter Marva (van der Gught), and her singing “talents”; quotes used advisedly since, as we see in a touching puppet-show, she has a severe lack of self-esteem which renders her useless before an audience. The movie starts to warm up when fate crosses Jean’s path with pop icon Debbie (Reuten), and he kidnaps her, ordering her producer (Löw) to make Marva a star too.

The media frenzy that follows is much as you’d expect, and the satire is clear, though muted by the film’s resolute refusal to laugh at anyone. Even the slimy producer is not unlikable for the way he manipulates the situation, once he realises who he’s dealing with – the giveaway is probably when the kidnapper, wearing a Michael Jackson mask, makes him listen to a demo tape of a song being hummed. I think some humour is Belgio-specific (Marva is named after a 70’s cult Flemish singer), and it’s a bit too gentle to work – I prefer my satire with more bite and fewer warm hugs. For this film is like being nibbled by a puppy, entirely non-threatening and kinda endearing. However, the sooner I get Jean’s horrible song, Lucky Manuelo, out of my head, the better.