Firstly, does anyone know who directed this? The IMDb lists Tanigaki and Chang. But Wikipedia says it was Tanigaki and Wong Jing. The South China Morning Post, whom you’d think would know about such things, states in their review, “Directed by veteran stuntman Kenji Tanigaki.” But the Hollywood Reporter – whom you’d also think would know about such things – gives sole credit to Wong. Especially on the comedy side, a lot of the elements have his broad stylings. If he had a hand in the script, as everyone seems to agree, that would make sense anyway. The film’s credits say, directed by Kenji Tanigaki, co-directed by Aman Chang. So, that’s what I’m going with. 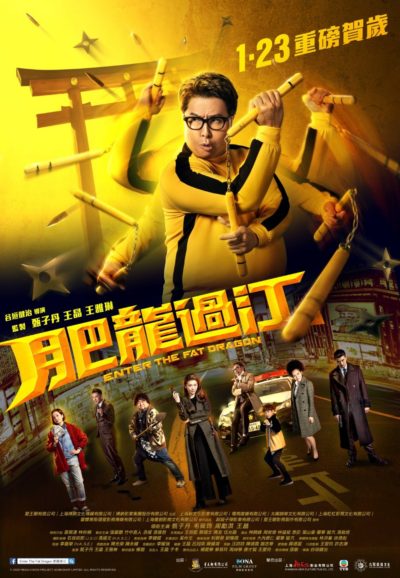 Next question. Is this a remake? While it shares the same title as a 1978 kung-fu comedy starring Sammo Hung, that and an overweight hero are about the only things the two  have in common. Hung’s pig farmer has become Yen’s cop, Fallon Zhu, and even the former’s innate corpulence has become a result of Fallon comfort eating after losing his role as a detective and his actress girlfriend, Chloe Song (Chow), on the same day. Truth be told, Fallon doesn’t even seem that overweight. Then again, I live in a country where 42.4% of the population are clinically obese, so who knows? This version is also surprisingly gentle – not least considering the involvement of Wong, hardly a man noted for subtle, understated cinematic wit. Outside of Chloe, no-0ne much mentions Fallon’s physique, let alone mocks him for in, and the final moral is almost disturbing inclusive: it doesn’t matter what you look like. [Given that 42.4% figure, I’d say more body-shaming might be helpful…]

It certainly doesn’t slow the policeman down. Given a chance to redeem himself by accompanying a prisoner to Japan, Fallon loses the perp, who ends up floating in Tokyo Bay, having seen too much of local Yakuza business. Fallon has to go up against them alone, largely because the local cops are in their pocket, though is somewhat helped by former cop Thor (Wong). This provides exactly the sort of awesome set pieces for which Yen is justly famous, including a spectacular roof-top chase, and a battle against the final boss atop Tokyo Tower. [Where’s Godzilla when you need him?…] It’s enough to make you forget Yen is close to sixty, something forgotten in regard to his relationship with the much younger Chow.

Considerably less effective is the humour, which largely either fails to translate or wasn’t that funny to begin with. About the only moment which worked was a nice spoof of Yen’s previous work, recreating a scene from Kill Zone: S.P.L. Otherwise, it’s guilty of trying too hard – or perhaps being lazy, with the supporting cast beyond Thor never achieving any depth. There are times when you’ll find yourself wanting to fast-forward to the next fight scene. In the end, these are good enough reason to keep watching, though there are points where even they teeter on the edge of not being enough.