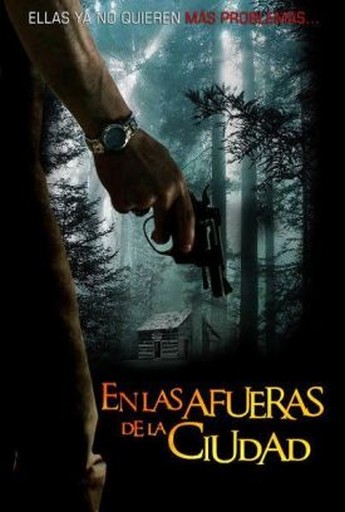 Just about every aspect of the plot here is, and there’s no other way to put this, severely fucked-up. In the Chilean backwoods, a small-time thug (Antivilo) keeps his two daughters, Ana (Lo) and Anny (Escobar) virtual prisoners, abusing them as he wants after having killed their mother in a fit of rage. The product of one incestuous bout is an inbred monster, chained in a shed. After a decade or so of this, a pair of local cops show up, and are dismembered by Daddy with a chainsaw. He goes on the run, but is captured and jailed, and his offspring bail for an even more remote cabin in the woods – Ana starts turning tricks to help them get by. This all poses a problem for his boss, a local druglord Costello (Soto), for whom Daddy was holding a large quantity of produce. Costello uses his prison contacts and arranges to “question” his employee, and when that goes messily wrong, sends his thugs to track down the daughters and find out what they now.

The title translates as “Hidden in the Woods”, which will also be the title of the upcoming US remake, starring Michael Biehn as the father. Even though it has the same director, I’ve got a feeling that will, almost inevitably, fall short of this in terms of its effective portrayal of repellent unpleasantness. The first 20 minutes, in particular, are truly harrowing, starting and ending with nasty, nasty murders, around a sandwich of incestuous rape that’s an ordeal for the viewer – and can’t have been much better for the actresses – to the point that you wonder if there’s a point. The film does eventually settle down and provide one, but remains the kind of movie where you feel you’ll be left needing a shower afterward. There’s hardly anyone in this that’s a sympathetic character: clearly, the two sisters are victims, but they never really become more than that. As a result, it almost plays like an inbred version of Tucker and Dale vs. Evil, telling the story from the monstrous family’s point of view – albeit one lacking in any comedic value, obviously. But the worst thing of all? Supposedly, this is based on a true story. I don’t even want to think about that.