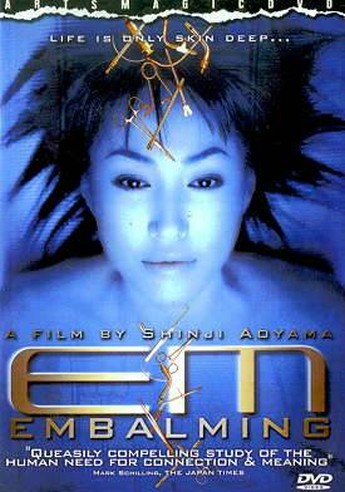 The heroine (Takashima) is, as the title implies, a mortician: working on the son of a politician, she finds a needle in the body. But this was supposed to be suicide – is there more to the case? From here spins off an extremely busy plot; cover-ups, organ harvesting, a religious leader, multiple personalities, and illegal drug experiments. It’s probably no surprise that some of these angles are never fully explored, and that’s a shame; there’s enough material here for a TV series.

Indeed, perhaps the best way to describe this, is to imagine an episode of CSI directed by David Cronenberg. Its main topic is death, but dealt with in a chilly and detached way, almost without emotion. Really, when you see a disbarred doctor, taking organs from a live patient, then reaching for his chainsaw, it’s clear that normal rules of morality are not in play here, at least for some characters. This applies on both sides, not least the cop whose attitude can be summed up as “shoot first, ask questions at some point in the distant future”.

The film is nothing if not educational, and is often fascinating. I didn’t know the mouths of corpses are glued shut, though some of the procedures still seem like sticking things into orifices for the sake of it. ArtsMagic should perhaps have got a real embalmer to do the commentary on this and explain what’s going on. 🙂 However, the lack of emotional content makes the movie in general too dry for my taste, and a somewhat unaffecting experience, despite much evident thought that went into the ideas contained therein.