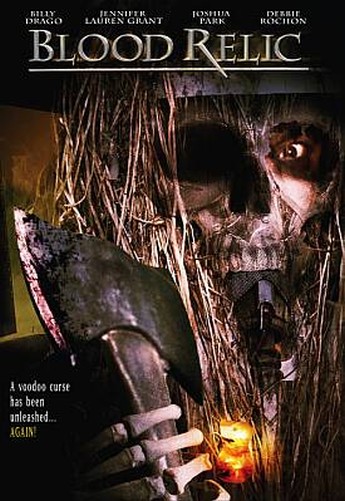 In 1983, a Navy pilot goes on a killing spree at his base. 22 years later, he’s released from the mental ward, and heads back to the base, which is now soon to open as a museum. The night he arrives, the staff (or at least, the young, photogenic members) decide to have a party… You know where this is leading: booze, strip poker, sex and lots of pointy implements. But who’s to blame for the growing body-count? The “cured” pilot? The uber-twitchy museum owner (Drago)? Or is there another malevolent force at work?

If I said this was a good film, I’d be lying. But I’d be lying as much if I said I wasn’t entertained, especially when it gets going. After a hopelessly bland start, whose only saving grace is Drago’s OTT performance, this recovers somewhat as things progress, though of all the victi…sorry, characters, Rochon is the only one to leave an impression. But the perverse imagination on display borders on the kinky, with sex and murder inextricably linked – no more so than a topless girl being strangled slowly to death, unwittingly, by her friends…

Admittedly, the final third, with its inevitable twists, probably wouldn’t stand up to scrutiny in terms of logic, leaving Relic closer to an Italian giallo than, say, more rigorously-plotted offerings. And I’d have felt more sympathy if the hero (Park) had looked less like Justin Guarini. Still, at least this wasn’t released under its original title, Scare Museum – for once, I agree with the video company dumping that name. In the end, this is about a psychotic killer in a flight suit + helmet, stalking around back corridors. Does anyone really expect great art?