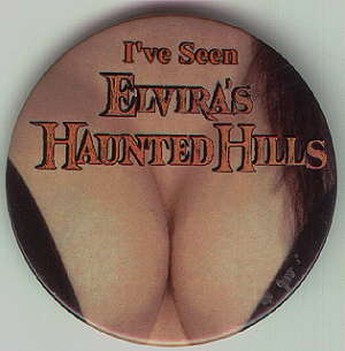 The best part of 14 years after Mistress of the Dark, Elvira finally gets her second feature, a self-produced film shot in Romania, and set in 1851. In some ways, it’s the same schtick as Mistress – total tart dumped in an unfriendly environment, on the way to her own show (then, Vegas, here, Paris) – but this time, there seems to be more attempt to set up a plot. These convolutions involve castle-owner Richard O’Brien, his dead wife, his still living wife, the local doctor, a family curse, and more. Truth be told, this sort of thing was done better by Corman in the 60’s, and only gets in the way of the comedy side – there’s just too much creeping around corridors/graveyards, and my interest certainly wandered.

The humour, however, is very successful; perhaps, a little too predictable, but there are delightful moments such as an unexpected Titanic reference, and Elvira’s asides to camera – no-one handles them with such glee. [fnaar!] Richard O’Brien chews the scenery as only he can, though I read one worrying report saying that Mick Jagger was the first choice. Ick. Another nice feature is the music, which sounds beautifully like a splicing of every Hammer film ever made…and indeed, this may be the case, since the version seen was a rough cut. It’d be a shame if the “proper” version is less evocative. Either way, as horror-comedy goes, compared to the dreck which is the Scary Movie franchise, let’s hope it’s not 2016 before she makes a third film.

[Elvira herself – in her day role as Cassandra Peterson – was at the screening, sitting in the row in front of us. Hardly recognised her “out of character”, since she had red hair and was dressed very modestly. My fiancee Chris looked rather more like Elvira than Cassandra did, but then, Chris was a contestant in the Elvira look-alike competition (she came third – beaten by two men, and as a result now holds a grudge against the entire cross-dressing community). Also in front was Alice Cooper, but we resisted the temptation to go “We’re not worthy!” at him…]