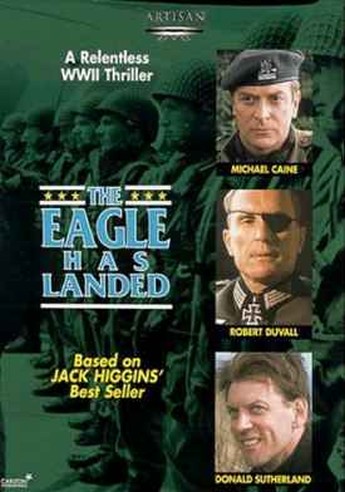 This is straightforward World War II thriller tells of a German plot to capture Churchill during a visit to an East Anglia village, with the aim of forcing a negotiated peace. The men are commanded by Steiner (Caine), whose unit was court-martialed on their way from the Russian front, after trying to save a Jewish girl; IRA member Liam Devlin (Sutherland) acts as an advance guard for the operation. Complicating matters, local girl Polly (Agutter) falls for Devlin, but their relationship is cut short by the arrival of the Nazis, disguised as Polish troops on manoeuvers. When this subterfuge is discovered, they take hostages and hole up in the local church, but Steiner still has plans to carry out the mission.

This is at its best while the mission is being planned and during the infiltration. The revealing of the “invaders” is contrived, and the battle which follows somewhat confused, with rather too similar uniforms to this military novice. The Germans should have worn Swastikas or something. 😉 It was also irritating how, East Anglia or not, it was still up to the American army to fight for the Allies – where were the Brits? What I did like, and what keeps the film running, are the characters; even the Nazis and their sympathizers, like Devlin, are given a human side which makes them more-rounded and interesting than the “good guys”. Mind you, when you pit the likes of Sutherland and Caine against Larry Hagman and Treat Williams, who lead the American forces, the winners, in the acting stakes at least, are clear.