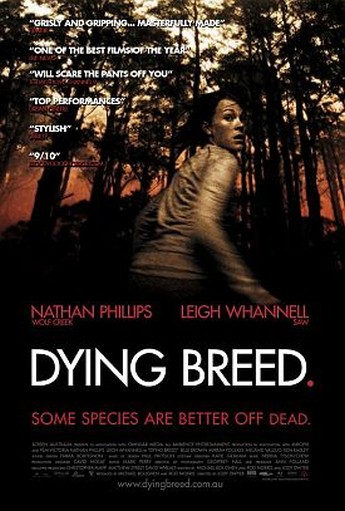 Zoologist Nina (Foulke) heads into the Tasmanian wilderness with her boyfriend Matt (Whannell), hoping to find evidence to prove that the extinct Tasmanian tiger still actually survives. Nina’s sister had gone on a similar expedition, only to vanish, turning up later, drowned and with all her teeth pulled out. The pair, along with another couple, head deep into the forests, and soon encounter locals who make the guys from Deliverance look like tourist-board employees. These ones are supposedly descended from penal colonist convict Alexander Pearce – who genuinely did exist, and on more than one occasion, escaped custody – then ate the people with whom he partnered up. This particular group are both proud of their ancestry, and the local delicacy, meat pies. It would appear none of the zoologists saw Sweeney Todd, or they’d have high-SUV’d it out of there. Needless to say, they don’t: hilarity munching ensues.

Largely forgettable, especially once it becomes clear where it’s going, as the film is largely incapable of pulling out any surprises. It’s more or less obvious who will survive, and what will be left of them, and the route by what this is achieved is so well-worn as to leave a groove in your TV set. The performances are not awful, except perhaps for Phillips’ low-rent Jack Black impression, and the landscape is undeniably impressive [not that it works as an advert for the Tasmanian Tourist Board, for obvious reasons]. There just is nothing with which a seasoned horror fan will not already be familiar, and the execution is generally lacklustre enough that it’s hard to overlook the familiarity of the characters and storyline. It’s just another reason why our idea of a trip inevitably involves room service, and we already had quite enough of those for all practical purposes, thank you.