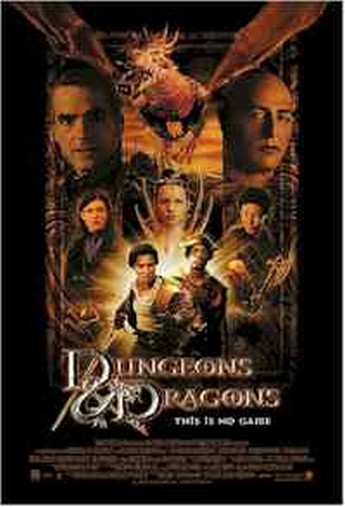 The favoured pastime of geeks (and I was treasurer of the D&D Society at university, so I should know) is now a movie, albeit little more than a boilerplate sword-and-sorcery one. The whole point of the game, that you grew to care about your characters, and could influence their fate, is missing, though there are some excellent effects (the mass dragon attack is very cool) and the villains are fab, particularly Bruce Payne as the blue-lipsticked enforcer of a scenery-consuming Jeremy Irons.

Indeed, most of what would be described as the non-player characters aren’t bad, it’s the cardboard hero and general lack of imagination to the story (which revolves around the Phallus of Listerine, or some such artifact that must be found before the bad guys get to it) which sink this. The hero gets his magic sword so easily, and with no explanation, I suspect there may have been chunks left on the floor. Despite the sniggers to be had seeing Dr. W…sorry, Tom Baker as a pointy-eared elf, you can only wince when Richard O’Brien plays a character who owns a maze. With a crystal at the end of it. Sheesh.