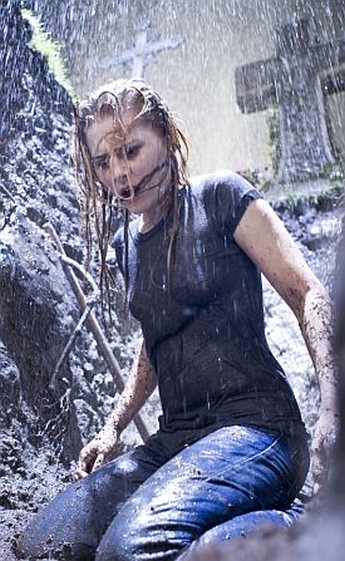 After a decade spent making Spiderman novies, the news that Raimi was returning to the horror genre was greeted with enthusiasm in genre fandom. The final movie, however… Not so much. I was expecting )(make that, hoping, at least) something akin to The Evil Dead, not the toned-down, PG-13 rated lameathon we get here. Ok, that’s probably a little harsh, but there’s very little here to distinguish this from any of the its unwanted siblings. When bank loan officer Christine Brown (Lohman) declines a request for a mortgage extension from an old woman (Raver), as a result she finds herself the target for a Gypsy curse, which has an evil spirit circling around, in ever-decreasing circles, intent on taking her soul. With the irate mortgagee suffering an unfortunate early demise, it’s up to Christine, her somewhat sceptical other half (Long) and an Indian fortune-teller (Rao), to find out how they can get the spirit off her scent. [A clue: think Night of the Demon: the 50’s classic, not the video nasty] Might it be convenient to drop it on her rival at the bank for the assistant manager’s post?

As the last sentence perhaps hints, this works better as a comedy than a horror-film, albeit in part because it hardly counts as the latter. We kept thinking, “Ok, here’s where the movie really gets going,” but it seemed content to keep back-pedalling away from the possibilities. Although Lohman deserves credit for handling the indignities heaped on her by the director (such as sloshing around in a rapidly-flooding grave, as shown on the right), she appears extremely uncomfortable in the central role, and fails to provide any bridge between the reality in which this is set, and the supernatural shenanigans which it invokes. Many were the occasions we muttered under our breath, “Where’s Bruce Campbell when we need him?” If there are some occasional moments that suggest Raimi has not entirely forgotten his heritage, the speed with which these evaporate suggest that he is more embarrassed by them than anything else. The main purpose this serves, is to remind us that Raimi only went into horror to begin with, because it was the easiest genre for funding. It’s clearly not where his heart lies, and if it’s another decade before he returns to it, I won’t be too bothered.