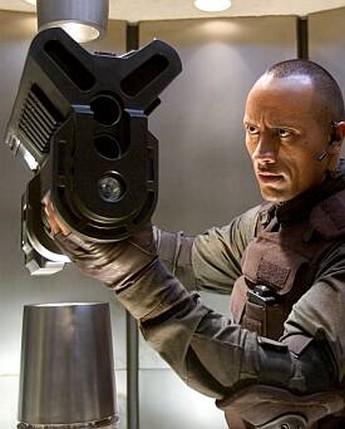 Doom is one of only four computer games I’ve played to completion, and it’s probably a while before we’ll see Zork: The Movie, so I’m inclined to cut this more slack than most. It is a straightforward story: a group of Marines led by The Rock arrive on Mars to investigate a quarantined research lab. Naturally, there is corporate malfeasance to be revealed, and one by one, the Marines are killed: though, thanks to the horrors they uncover, death is not exactly the end of matters. As video-game adaptations go, this is about average – which given the past pedigree of such things, makes it below-average in general cinematic terms. The main problem is that the subject matter is over-familiar; there’s nothing here we haven’t seen before, most notably in movies such as Aliens, or even video-game movies like Resident Evil.

I mean, the second that one character walked into a bathroom, Chris pin-pointed his fate – and after five minutes of failed attempts at tension building, it came to pass exactly as she called it. That kind of predictability blows any entry in the horror genre out of the water, and this also takes too long to get going. To the film’s credit, it does have an interesting twist, with one heroic character suddenly doing what’s called a “heel turn” in wrestling circles, and becoming a villain. There’s also the 5-minute “first-person shooter” POV sequence, which we loved: some day, someone will make an entire movie that way. But hopefully not Bartkowiak, who has shown no particular aptitude for the action genre in any of his work as a director. And, sadly, at no point does The Rock drop the People’s Elbow on any monsters. That’d have been a memorable moment, in a movie largely bereft of them.