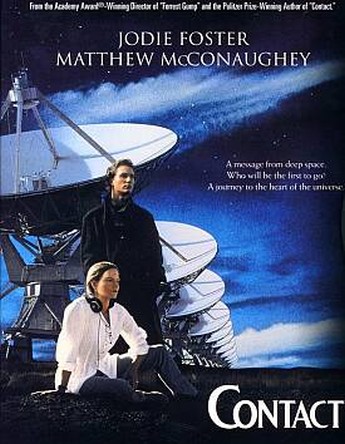 As a kid, I used to get, as a special treat, to stay up and watch Cosmos, Carl Sagan’s series on life, the universe and everything. Usually, by the end of the episode, I had dozed right off; and even now, the sound of his voice is sufficient to get me nodding. While Sagan died before this version of his novel came out, a lot of the words are clearly his, so I can be forgiven for snoozing through the more relaxed, expository sequences, as I regressed gently to those innocent days of my youth. It is, certainly, a thoughtful movie, that proceeds at its own pace, after radio astronomer Ellie Arroway (Foster) receives a message from space. [Note to Hollywood: magna cum laude Yale graduate Foster is a plausible radio astronomer; Charlie Sheen is not] The implications are enormous, and are addressed: indeed, perhaps the major focus is on how various groups (government, media, religious, etc.) react to the news that “We are not alone.”

It’s such a momentous topic, even 150 minutes doesn’t seem adequate, leaving the film somewhat overstuffed, though it has many interesting points. Religion does not come out well, with an atheist heroine, and Jake Busey as the main representative of organized faith. [Never a good sign…] There’s also a problem with the lack of resolution at the end: while entirely plausible, that does not necessarily make for good cinema. The lacklustre relationship between Arroway and new age guru Palmer Joss (McConaughey) doesn’t help, but there are great supporting characters, notably James Woods as an intelligence boss, suspicious of the aliens’ motives. At its best, the film is engrossing and smart: at its worst, soporific and preachy. Fortunately, the skew is towards the former.