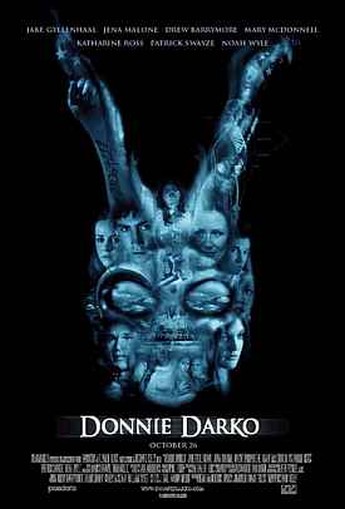 While I can see why this has attained cult status, particularly among alienated teenagers, I found it curiously unaffecting. Perhaps I was too concerned with trying to work out what was going on: it’s certainly a somewhat confusing structure, turning back on itself at the end, in a Moebius-strip way, which then proceeds forward again on a different line, or parallel universe. “Lynchian”, might be a good way to describe it. Donnie (Gyllenhaal) is already in therapy and on drugs, and after his bedroom is crushed by a jet-engine when he’s not there, his life really starts to get weird: a man-sized rabbit called Frank tells him the world will end in 28 days. But he also meets Gretchen Ross (Malone), who can relate to him in a way perhaps only his therapist (Ross) can match.

From reading about the film, it seems clear that the movie, on its own, doesn’t explain particularly well the scenario which is unfolding – you need backup, like the director’s commentary or official web site, in order to understand exactly what’s happening. While I’ll happily watch films that are open to interpretation, the extent to which it’s done here, is too much a cop-out, with large chunks of information not available immediately to the viewer. It’s still an intriguing concept, with some good moments (not least the repartee between Donnie and his sister, who is played by Jake Gyllenhall’s sister Maggie), but I do think the theme been treated both more effectively, and with greater thoroughness, elsewhere. This just feels too self-consciously “clever”, to be genuinely smart.