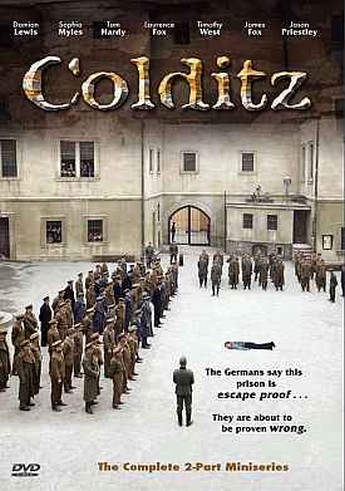 British readers whose age begins with “4” will remember the TV series of the same name, starring David McCallum, among others. Which is largely why this caught my eye; TV movies aren’t our usual fare here. This proves a decent-enough waste of time, placing fictional characters into the real setting of the Nazi POW camp, with a few nods to actual events, such as an attempt at impersonating the camp electrician. Not sure it works, perhaps because the films’ protagonists don’t meet for the middle 170+ minutes. An escape bid sees Nicholas McGrade (Lewis) make it home, while Jack Rose (Hardy) is caught and sent to Colditz Castle. Back in Britain, McGrade gets a job in MI9, then meets Rose’s girlfriend (Myles) and, falling for her, decides to fake Rose’s death. When word filters back, Rose knows he must leave the “escape-proof” camp before his woman is lost forever.

I get the feeling this diverts too much energy outside the castle walls, which would have been a fine claustrophobic setting, even if the portrayal of the Nazis is laughably shallow – nothing beyond marching around and shouting. Still, I almost felt irritated every time they’d cut back to McGrade and his romancing, though Timothy West’s boffin does almost steal the movie there. It’s only at the end, with Rose escaping and McGrade prepared to go to any lengths to prevent his return, that there’s any real tension generated, and it’s at too much of a distance to be truly effective. It has nice cinematography and a decent sense of period atmosphere, however, so is not terrible, despite playing fast and loose with the history. But there’s nothing here to make my childhood memories of the original show burn any less bright.