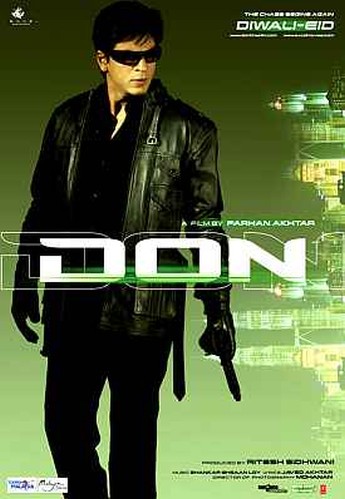 In this remake of a 70’s Bollywood classic, Don (Khan) is the elusive lieutenant who runs a massive criminal empire based out of Malaysia, on behalf of his boss, Singhania. DCP DaSilva (Irani), the policeman in charge of the case, finally manages to capture his man, and comes up with a cunning plan to replace Don with a double, to gather evidence that will let him bring down the entire organization. However, he doesn’t know that one of Don’s associates, Roma (Chopra) plans to kill him, as revenge for his killing of her brother and his fiancee, Meanwhile, Jasjit (Rampal) is out for revenge of his own on DaSilva, as the cop stopped Jasjit from rescuing his wife and child from blackmailers, leading to her death and the child’s disappearance. Can Don’s double get the disk to DaSilva with all the proof he needs? And what happens to the double if Jasjit gets his revenge, since DaSilva is the only person who knows what’s going on?

Well, there’s certainly plenty going on – it’s not often that a Bollywood movie can justify a near-three hour running time, based on the complexity of the plot, but this makes a stab in that direction, and is one of those films where no-one is what they seem. You realize this about half-way through, and the twists which follow are a good deal less effective as a result – whether because you’re expecting them or because a couple frankly defy belief, it’s hard to say. Akhtar generally keeps things moving, and there’s a lush, big-budget feel to proceedings, though the songs still bring the film to a halt. Khan looks a bit uncomfortable in his due roles: while he’s fine as Don, he is much less convinving in the role of the double, and this is likely where the script has at least one twist too many for its own good, requiring too much convenient coincidence for things to mesh effectively. Judicious pruning would have made for a more effective product, and the gloss can only conceal so many flaws in the story.