This film is the cinematic equivalent of a new-born lamb: it’s pretty useless, and bumps into things a lot, but you can’t help liking it. For it wears its cheesiness on its sleeve like a badge of honour, making up in sheer gall what it lacks in production values, acting, dialogue and storyline. An over-acting English vampire (Kjaer) discovers he likes the taste of holidaying Chinese doctor Lam, and sends his henchbabe (Ellen Chan) to Hong Kong to recapture dinner. Said meal, meanwhile, is developing a taste for sunglasses and long capes with high collars… Unusual to see Hong Kong using Western vampires, rather than their own hopping kind, though the result seems to pull myths from out of every corner of the globe. It’s all very silly, in case you hadn’t guessed, and shallower than the average puddle; however, you’ve got to laugh – well, *I* did, anyway – at a doctor who drools hungrily during operations. Surgery as an all-you-can-eat buffet? 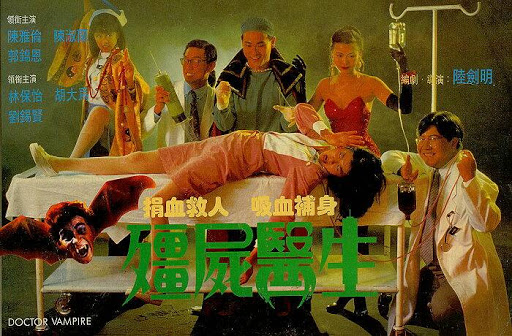