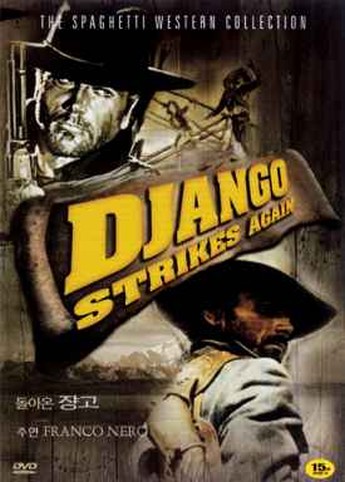 Twenty years and countless unofficial sequels later, an official follow-up to Django eventually surfaced. And it’s a decent successor to the original, though has less in common with its predecessor than, perhaps, Fitzcarraldo. Mad Hungarian aristocrat, Orlowsky (Connelly), has turned a river into his personal territory, enslaving locals to work a silver mine, with a nice sideline in white-slavery. However, when one raid nets Django’s daughter, he comes out of monastic retirement, digs the machine-gun up from his grave, and sets out to rescue his offspring. Actually, while he may be a great gunfighter, he is a bit crap at saving small children: both attempts end up with him being captured and tortured. It’s only through the assistance of Orlowsky’s sidekick, who appears to have come over in a trade with Ilsa, Harem-Keeper of the Oil-Sheiks, that he finally gets to run amok with his machine-gun and its apparently amazing bullets that only hit bad guys.

It’s very easy to be cynical about this kind of film. You can probably tell. But it’s done with the straight-faced enthusiasm the project requires, even during loopy angles like Orlowsky’s obsession with finding the fabled black butterfly (echoes of Gwendoline there – which’d explain the sidekick, thinking about it). Donald Pleasence has a brief role as a Scottish entomologist (see also Phenomena), hams it up mightily, then cashes his check. It is, undeniably, almost entirely unconnected to the original film, with Colombia a far less credible replacement for Mexico than Spain. While anyone expecting the dark angst of Corbucci’s original will also be sorely disappointed, at least this piece of jungle nonsense is fun, rather than an embarrassment to all concerned.