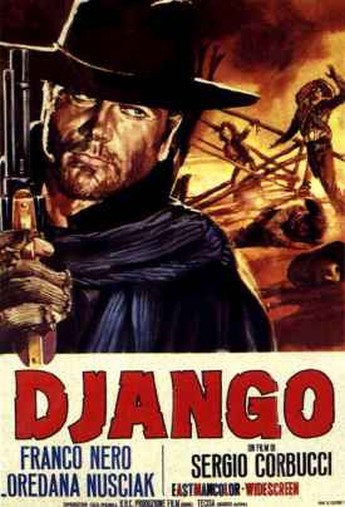 Did you know “Django” is Romany for “I awake”? Or maybe Corbucci was just a fan of Django Rheinhardt. No matter, the image of the anti-hero (Nero) dragging a coffin through a grim, muddy landscape is among the most iconic of the genre. What is in the coffin? That’s the question that occupies the front third of the film, and there’s no doubt that the answer is entirely satisfying. However, problem is, the film hasn’t got all that much to offer for the next 45 minutes, diverting into a somewhat disappointing thread involving Django teaming up with a band of Mexicans to steal some gold, then steal the gold from them. This aspect proves more a tired rehash of Western cliches, than the radical re-invention hoped for, based upon the opening, and it’s easily to believe the script was still being written as they filmed.

Still, Nero’s sheer cinematic presence makes for compelling viewing, as he spits out sarcastic, post-bloodbath lines like, “You can clean up the mess – but don’t touch my coffin”. And the finale, appropriately enough in the local cemetery, where a broken-handed Django removes his gun’s trigger guard with his teeth, before facing the sadistic Major Jackson (Fajardo) and his men, is brief and to the point. This is not your clean, Hollywood Western, no. Not with ugly saloon whores cat-fighting in the muddy streets of an otherwise deserted town, all sane inhabitants having fled or been killed. With such a fabulous, unconventional setting and lead, it’s a pity there was not more effort put into creating a storyline to match.