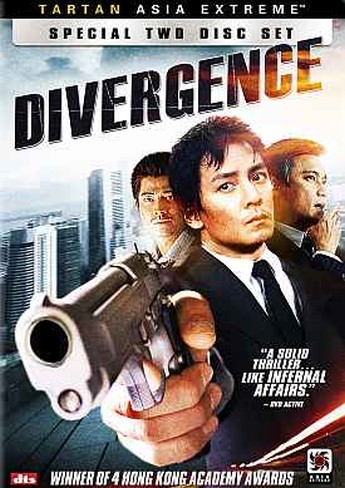 “Winner of 4 Hong Kong Academy Awards” trumpets the cover. Er… Firstly, there’s no such thing; AMPAS would have a fit if they even tried. The equivalent would be the Hong Kong Film Awards, but this film only won one, for editing. And, after sitting through this muddled and largely uninteresting mess, you’ll be hard-pushed to argue it was unjustly overlooked. Mopey cop Suen (Kwok) is still distraught over the disappearance of his girlfriend, ten years ago. The witness he’s bringing back from Canada gets sniped by Coke (Wu), which brings relief to the corrupt businessman (Law) he was going to testify against, and his lawyer (Cheng). That should be enough plot, but Chan also throws in the disappearance of the businessman’s pop-star son, Coke’s relationship issues, the lawyer’s wife (who resembles Suen’s girlfriend) and a series of murders by piano-wire. As a result, the film sinks under its own weight.

It looks nice, and Chan’s excellent action eye is demonstrated in a solid foot-chase, the best part of the film. But when Suen sits in his car, weeping for his lost love, while the vehicle rolls back down a hill, the urge is almost irresistible to scream “Get over it!” I imagine not quite the effect the creators were aiming for, and few of the characters possess any emotional depth or resonance. Overall, the result here resembles a one-armed drunk man, juggling chainsaws: it really doesn’t make sense, and you kinda admire the effort, but it’s just a huge waste of time, and is bound to end in disappointment all round.