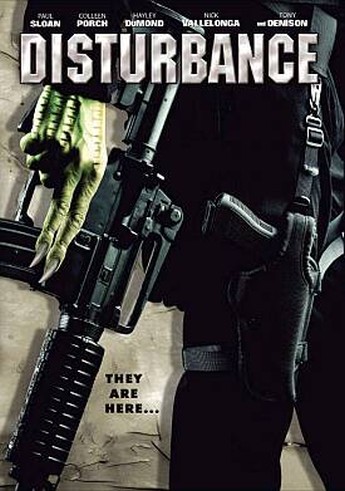 For the first 20 minutes, you’ll probably be floundering, as this initially unfolds with little or no explanation. Hud Masters (Sloan) runs round a city, forcing pills down people’s throats, to make them vomit up luminous green fluid. His partner (Porch) then calls for cleanup. Even if this goes on longer than necessary before the plot becomes clear, I’m intrigued, though if you guessed The Hidden is a main inspiration, you’d be right: ET’s are to blame, a good alien hunting down the bad ones, which can jump between human hosts. The police, meanwhile, are naturally baffled by the strange events that unfold; when they do get a handle on it, the Man In Black (Vallelonga) sweeps in and tells them to move along. The last part hints that this isn’t just a slavish clone, and other elements, such as Hud’s origins as a hunter, prove some thought went into the script, even if it was written in only two weeks.

I liked the characters, too; DuMond, playing the leader of the bad aliens, is particularly effective, and most have endearing quirks, such as the poor, perpetually-baffled coroner. The frantic pace does slow eventually, with a poor martial-arts battle, a climax that’s little more than some thrashing about in a pool, and an entirely predictable coda. The low budget is also clear, simply in the limited scope of the effects and action – the aliens never break out the advanced tech they claim to have! But in my viewing experience, it’s better film-makers rein in ambition, rather than over-reach, to concentrate on aspects like script and dialogue. For the most part, that’s been done here, and all told, it makes for a pleasant slice of SF-noir which entertains solidly enough, within its restrictions.