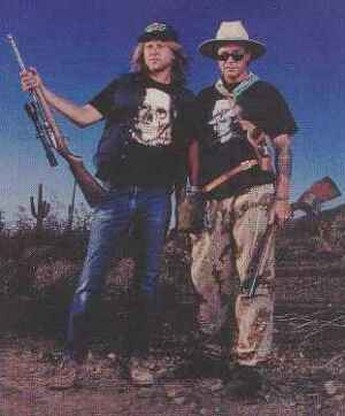 As The Blair Witch Project showed, the pseudo-documentary allows low-budget film-makers to paper over cracks with a wave of the hand-held. But as Blair also showed, it isn’t sufficient by itself; you still need characters, and this is where Baron Dixon really scores. We don’t see much of the title character, for he has vanished, and that disappearance provides the subject of the documentary. This is no ordinary departure: Dixon had been obsessed with aliens and UFO’s, and had, that day, told his friends he’d be leaving for another planet.

From here unravels an investigation at his life, and a sad, lonely thing it generally turns out to be. But despite this, a lot of the interviewees are fabulous, particularly his two acid-head friends, Randy and Ed (Hotchkiss and Anderson – shown right). They are simultaneously very funny and quite scary – to the point that you wonder whether they were involved in Dixon’s disappearance. The art-collector and gallery owner are also great, fulsomely praising Dixon’s childish scrawls. It’s not all so successful: Dixon’s mother seems unnaturally stilted, while Dixon’s former work colleagues are simply unpleasant and repetitive – more of both should have been left on the cutting room floor.

No real conclusions are drawn: did Dixon create his own disappearance from a life with little point; was it foul play; or even a genuine abduction? We never know. But one twist towards the end gives it a poignantly romantic feel, and the film is as much a love story for social misfits as anything else. The original soundtrack by Ryan Ferguson certainly has moments, and some of the ideas are strikingly effective, such as Dixon’s dog, which sits at the end of the drive every day, gazing off into space, as if seeking its master…

Indeed, dogs seem to be a favourite of director Cochran – before the screening, marking the opening of Phoenix’s new “microplex”, the Monkeyshow Theater (seats 35, on a mix of armchairs, futons and loveseats), we got 20 minutes worth of footage of puppies – certainly beats adverts for Chinese restaurants. But it’s what you’d expect from Cochran, a genuine character: to quote the Arizona Republic, he “had a Phoenix public television program called Keep on Painting. Intended to be an instruction series, the program’s comical edge strained the TV executives’ sense of humor. Due to illegal gambling and nudity, Episode 3 was yanked and Cochran’s TV career hit the screening-room floor.” There’s a story in there somewhere.

I digress. What you have here is a quirky, off-beat semi-SF tale, that meanders into social satire with variable effectiveness. If it certainly doesn’t all work, enough does to make it more entertaining and interesting than many films, and I look forward to checking out his earlier work, Punk James, in the new year.