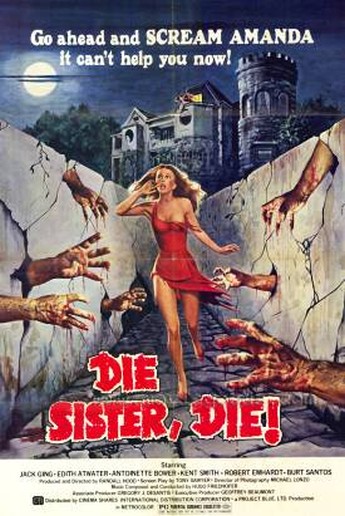 Edward (Ging) and Amanda (Atwater) are brother and sister; Amanda got the inheritance from their father, but Edward wants it, to fund his spendthrift lifestyle. To achieve this goal, he hires ex-nurse Esther (Bower) to oversee Amanda, and push her to suicide. But when this doesn’t work, he opts for a quicker method involving doctored sleeping pills and cyanide. Not quite sure how he planned to get away with it, especially as a doctor (Smith, hero of the original Cat People) is sniffing suspiciously around; giving the benefit of the doubt, we’ll assume he was going to frame Esther. There’s also a missing third sibling, who vanished after their father died; you may well realise her significance before the film tells you.

Despite questionable plotting – Amanda wants to kill herself, so why doesn’t Edward just let her? – this isn’t too bad, assisted by enthusiastic performances from the leads. Atwater does particularly well: it’s a role into which you can easily see Katherine Hepburn or Joan Crawford really sinking their teeth. Director Hood has an awful fondness for badly-shot flashbacks, however, which don’t just start and end with wavy lines, but utilise the effect for their entire duration. Keep the sea-sickness pills handy. A satisfactory moral ending proves crime doesn’t pay, although I should point out that, contrary to the poster, at no point does Amanda run around in a flimsy negligee. Since Atwater was in her sixties at the time, we should likely be grateful.