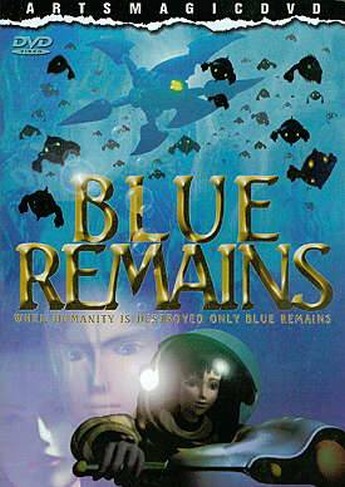 Computer animation dates fast: what was cutting-edge last year, is common this, and will be retro next. Blue Remains dates back to 2000, and so is almost an antique; certainly, its bare-bones underwater setting looks particularly pale beside the gloriously alive aquatic world of Finding Nemo. Though in the film’s defense, this sparseness may partly be deliberate, as it portrays a post-apocalyptic world where the planet’s last hope is a girl and her vial of seeds. Meanwhile, the villainous Glyptofane Sex is out to cleanse the planet by wiping out the remnants of humanity. Glyptofane is a disembodied brain. Or perhaps a hyper-intelligent jelly fish, it’s not clear; explanations of what or why are not Blue‘s strong suit. [Between this and the teenage heroine, I suspect it was perhaps aimed at a young audience.]

One could argue this is actually less about narrative coherence than cool underwater battles – these confrontations are certainly well-staged, and remain impressive even four years later. However, neither the environment nor the characters are anything to write home about, and in terms of personality, your average Sims family has greater depth and charm. This is perhaps what you’d expect from a film funded, as here, by local government (Okinawa, to be exact). There are also friendly disembodied brains named after DNA proteins, and a robotic dolphin, but we’d have traded it all for better plotting and more engaging characters. On a Sunday afternoon, this might pass muster, but we made the mistake of watching it at 11:30 on a Friday night, and it didn’t hold our interest.