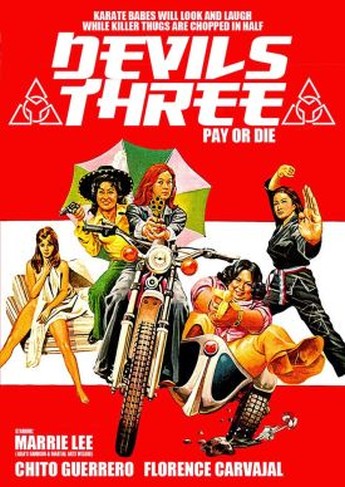 I’m not sure if this is remarkably progressive for its time (which was 1979), since the heroic trio at the center of this are two women and a flamboyantly gay guy – one of the former weighing a good 300 lbs. This is certainly pushing the boundaries of the traditional action star, though the SJW approach is likely rather diluted since at least two of the three are played entirely for laughs in this Phillipino action pic. I had actually seen Lee previously, in the rather fun They Call Her Cleopatra Wong, which was surprisingly decent; she had some decent kung-fu moves. This is rather more comedic in intent, and rather less interesting as a result. The premise, however, isn’t too bad: Lee is an Interpol (or whatever the South-East Asian equivalent thereof is!), called upon by criminal kingpin Lucifer Devlin (Wilson) after his daughter is kidnapped by rivals. He promises to turn himself in, if Wong will rescue his offspring; to do so, our heroine needs people who won’t be recognized. Enter the uber-flamey Ton Del Rio (Guerrero) and uber-plump clairvoyant Rotunda (Carvajal).

Here is the level at which this operates. They discover where the kidnappee is being held because the kidnappers say, if their demands are not agreed to, the victim will be put on ice. Clearly, this means she is at the local ice plant. And, lo, that’s exactly where she is. If ever I become an evil overlord, my minions will be strictly forbidden from dropping cryptic hints as to the location of my operations. when communicating with the good guys. The action is occasionally good, but the efforts at injecting humour into this feel so horribly forced, and are mostly completely unfunny. Perhaps they just haven’t dated well, though I suspect they were never all that amusing to begin with. It is nice to see a film made in the country by local film-makers for local consumption, rather than them simply acting as a cheap venue for Roger Corman and his colleagues. However, unlike Wong, which was a solid enough knock-off, the attempt to add laughs falls flat, and you wish Suarez just hadn’t bothered.