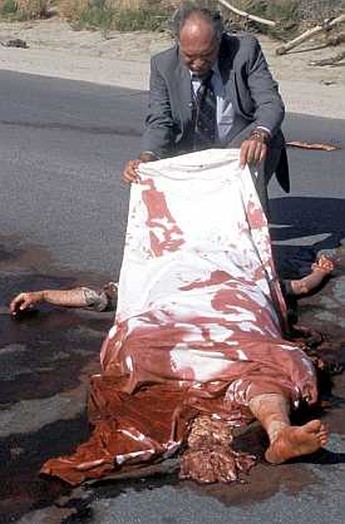 Initially, this felt like a significant upgrade over House of 1000 Corpses, but on checking, it ended up getting exactly the same grade: guess my standards must have shifted in the past five years. The main improvement is the way Zombie here takes repellent, psychopathic, sadistic characters such as Otis B. Driftwood (Moseley) and make the audience feel like they are the victims, of the even more repellent, psychopathic and sadistic Sheriff Wydell (Forsythe). The movie begins with him leading an assault on the Firefly family farmhouse: most of the clan escape, but the matriarch is arrested and, during interrogation by Wydell, reveals it was she who killed his brother in House. That tips the unstable policeman over the edge, and he hires the Unholy Two, a pair of bounty-hunters, to bring in the fugitives by any means necessary. And when Wydell gets his wish, it becomes apparent he’s even more loopy than his victims.

This isn’t comfortable viewing, with an almost non-stop barrage of torture and abuse, yet is made somewhat easier to watch by the characters here being just that: characters, rather than flat stereotypes. I’m particularly fond of Captain Spaulding, the kind of clown who’d give even John Wayne Gacy nightmares. However, as in House, Zombie can’t keep the pace going for the entire film. This is most obvious in a lengthy coda, which apparently exists for no reason except to play Freebird, in what appears to be its entirety. While it’s nice to see amoral cinema which pits two degrees of evil against each other, between this and his Halloween remake, it’s clear that Zombie is stuck in a time-warp of his own making, with the entire film a loving reference to grindhouse flicks of the 1970’s. For the moment, one can only wonder what he might do in the modern era.